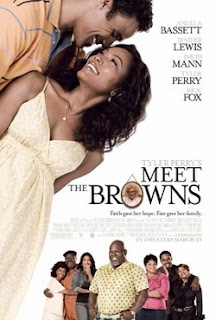 Tyler Perry’s Meet the Browns is a 2008 film based upon a 2004 play written by Perry (like many of his films). The film was later spun off into a cable television series of the same name.

The film focuses on Brenda Brown (Angela Bassett), a single mother living in inner city Chicago, with her three children: daughters Tosha (Chloe Bailey) and Lena (Mariana Tolbert), and her oldest child, Michael (Lance Gross), a talented high school basketball player. Struggling for years to make ends meet and keep her three kids off the street, Brenda loses her job when her company shuts down (on pay day!). Brenda is feeling very down when a letter from Georgia arrives announcing the death of the father she has never met.

Looking for a chance to get away, Brenda takes her family to an unnamed small town in Georgia for the funeral. Nothing could have prepared her, however, to meet the Browns, her long lost relatives. Crass and fun loving, this Southern clan welcomes Brenda and her children to raucous family get-togethers and lavish meals of traditional Southern fare. Brenda also once again encounters Harry Belton (Rick Fox), a basketball recruiter interested in Michael’s future who first visited the family in Chicago, but Brenda is suspicious of Harry’s intentions both towards her and her son. Meanwhile, back in Chicago, Michael is determined to help alleviate the family’s financial problems and begins to consider becoming a drug dealer. Should Brenda stay and fight it out in Chicago or return to her strange, new family in Georgia?

Like Tyler Perry’s Daddy’s Little Girls, Meet the Browns is a drama with some humor. In a way, it also seems to be two movies – one focusing on Brenda and her family’s trials and tribulations in Chicago, and the other (the shorter of the two) focusing on Brenda’s small town relatives, the Browns. The parts of the film that take place in Chicago feature Perry’s usual besieged, single-parent melodrama, but it isn’t as good as what was in Daddy’s Little Girls. Frankly, except for a few sequences, the only part of Brenda-in-Chicago that I enjoyed was the delightful comic performance by Sofia Vergara as Brenda’s coworker and friend, Cheryl.

Meet the Browns is at its best when we are meeting the Browns, especially the wonderful Mr. Brown (David Mann), who is the main character of the spin-off television series. Jenifer Lewis also gives a salty comic turn as Vera Brown, and this film would have been better had Lewis had a bigger role. Former Los Angeles Laker, Rick Fox, gives an average performance, a bit stiff and dry, about what one would expect from former professional athletes taking up acting.

Another problem with this movie is that the lead actress, Angela Bassett, often seems out of place. There are moments when Bassett’s turn as Brenda Brown is pitch-perfect and poignant, but there are indeed moments when Bassett overacts and Brenda comes across as shrill. It is a testament to her skill that those bad moments don’t overwhelm the entire performance, as well as the movie

Audiences that enjoy Tyler Perry’s usual mixture of moralizing, affection, and forgiveness mixed with boisterous comedy and mockery will enjoy Meet the Browns, although as Perry films go, it is not one of his better films.