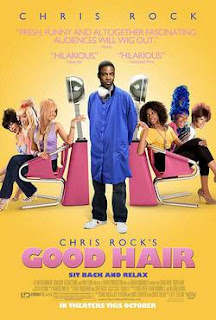 At the beginning of his documentary, Good Hair, Chris Rock says that his daughter, Lola, came up to him crying and asked, “Daddy, how come I don't have good hair?” Bewildered, the Emmy-winning comedian, talk show host, and actor decided to find out what in African-American culture would put such a question in his little girl’s mind. To find answers, Rock, the film’s star and narrator, crosses continents and oceans. Traveling from New York to Atlanta and from India to Los Angeles, Rock visits a hair show, a scientific lab, a hair products manufacturer, and an Indian temple. Rock also visits numerous hair salons.

Along the way, he explores the way Black hairstyles impact Black people’s lifestyles and activities, pocketbooks, and sexual relationships. He even gets African-American women to talk about how their hair affects their self-esteem. A number of celebrities, entertainment industry figures, and public figures (from Maya Angelou and Rev. Al Sharpton to Ice-T and Salt-N-Pepa) candidly offer their stories and observations about Black hair. He may not get his answers, but Rock will discover that Black hair is a big business that doesn't always benefit the Black community.

The truth is that Good Hair, directed by Jeff Stilson, is less a documentary than it is like a feature news piece one might see on “20/20” or "Dateline NBC." There is a lot of funny stuff here, some of it quite shocking, but most of this movie really lacks a social or historical context. Rock and his co-writers certainly get close enough. For instance, the film reveals the fact that a large segment of the “black hair industry” is controlled by Asian-Americans who shut out African-American entrepreneurs. Rock touches upon it, but never really delves into that. He just skims the fact that in the 1980s, white-owned corporations like Revlon set out to remove Black-owned companies and corporations from the hair care business, where over 80 percent of the money comes from African-American customers.

No, rather than really examine the lack of Black ownership, Good Hair brings it up and then, it’s on to the next freak show. And that’s what this movie is – a freak show. It is very entertaining – often hugely entertaining, and I’d highly recommend it to anyone who is African-American or is interested in African-American culture. There is even a touch of sadness here, as if the filmmakers were recording an on-going tragedy. Good Hair, sadly, is a documentary that touches upon greatness, but ultimately decides to be little more than a delightful and hilarious puff piece.