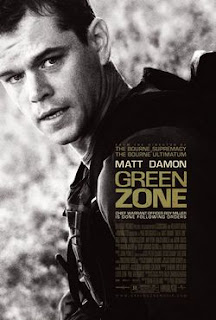 Director Paul Greengrass and actor/movie star Matt Damon came together to produce two of the three Jason Bourne movies (The Bourne Supremacy and The Bourne Ultimatum). They reunited for the film Green Zone, which is not a Jason Bourne movie or anything like that. Green Zone is a movie set at the beginning of the Iraq War. Green Zone

is part military action movie, but it also has something to say about the reasons for the Iraq War.

The story focuses on Chief Warrant Officer Roy Miller (Matt Damon) and begins early in the U.S.-led occupation of Baghdad in the spring of 2003. Miller leads a team of U.S. Army inspectors searching for weapons of mass destruction (WMDs) believed to be stockpiled in and around Baghdad. After investigating a series of sites and finding nothing, Miller begins to suspect that the intelligence about Iraq’s weapons of mass destruction is faulty, at best.

Miller’s military superiors and other high-ranking officials dismiss his theories about flawed intelligence, and he comes into conflict with U.S. Defense Intelligence Agent Clark Poundstone (Greg Kinnear) who seems to be guiding much of the American occupation of Iraq. After meeting, Martin Brown (Brendan Gleeson), a Middle East-based CIA officer, Miller stumbles upon an elaborate cover-up of the reasons behind the Iraq War. Now, Miller must navigate the intersecting agendas spun by competing operatives, as he hunts for answers that may clear Iraq’s fallen regime of war crimes or even stop an insurgency from being born.

Green Zone is a politically engaged film. Using Matt Damon’s Roy Miller as a vehicle, Paul Greengrass and screen writer Brian Helgeland addresses Greengrass’ contentions about the decision to invade Iraq (the country’s alleged possession of WMDs) and subsequent decisions made during the U.S.-led Coalition occupation (in particularly the decision to disband the Iraqi army).

Greengrass’ problems with the Iraq War have also been the subject of many television and theatrical films (both fiction and non-fiction). Making these arguments about Iraq within the framework of a military action thriller actually can result in a movie with an identity crisis, which is the case with Green Zone. Greengrass attempts to make his points about the war, unveiling them during the course of Roy Miller’s investigation, which involves talking to and shooting at people.

The first 55 minutes of the movie mostly sets up the story, and it follows Miller as he gradually makes a series of startling discoveries about the run-up to the Iraq War. This is more dry and dull than interesting. The first half of the film is so slow and awkward that it is almost a disaster. Honestly, Greengrass’ contentions about the Iraq War are only interesting in the context of the movie’s second half. That’s the action/thriller half which has Roy Miller trying to find Iraqi General Mohammed Al-Rawi (Yigal Naor) before a Special Forces unit does. This second half will remind audiences of those breathless action scenes Greengrass and Damon pulled off in their two Jason Bourne movies.

It is cool that a Hollywood movie would confront the controversies of the Iraq War, but the best thing about Green Zone is the tense pacing and smartly constructed action sequences. Unfortunately, the politics are, at best, distracting and, at worst, debilitating to the movie.