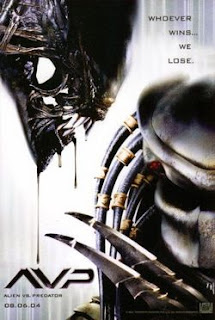 SCI-FI/ACTION/HORROR/THRILLER with elements of mystery

For those who have at least a vague idea of what’s going on, AVP: Alien vs. Predator is a dumb, mildly entertaining picture with some genuinely thrilling, scary, and heart-stopping moments. During an archeological expedition in Antarctica, a team scientists and archeologists discover an ancient pyramid beneath the ice and a deadly trap. The team, led by Alexa Woods (Sanaa Lathan), a top expedition and field guide, find themselves caught in the middle of a small war between two legendary movie monsters, the Aliens and the Predators. Only one species will survive, and the numbers don’t look good for the humans.

Alien vs. Predator is a movie-fan movie the way Freddie vs. Jason was a movie for fans of movies. You kinda had to know what’s up with Freddie and Jason to really enjoy that flick (or to at least have a chance of liking the film); thus it is with AVP. Those who have seen the four films of the Alien franchise and the two films in the Predator franchise will best know what’s going on in this story. If not, you may have some trouble, as some of the teenagers who made up most of the audience where I saw this movie. Director Paul W.S. Anderson’s script assumes the viewer is familiar with both the Alien and Predator films, or with the various Alien vs. Predator comic books that Dark Horse Comics has been publishing since 1990 or the AVP video games.

Is this a great film? No. Could it have been a great film? Probably not. Anderson makes a film that lies flat; even when his screenplay has the characters digging through the mysterious circumstances they keep finding themselves in, the story seems to lack an extra dose of oomph. In the end, it is an adequate sci-fi monster thriller. Although the film doesn’t overly rely on CGI, the SFX are actually quite good and for the most part seamlessly blend with the live action.

Even though it’s a simple-minded popcorn movie merely meant to generate cash for a huge, multi-national media corporation, AVP is still a popcorn movie that registers nicely on the interest scale. It’s one of those bump-in-the-dark movies that you can watch over and over again. You don’t have to think, just sit there and wait for the monster to come running out of the shadows, or at least just sit there and laugh at the holes in the plot because this movie often ignores its own internal logic. If you liked the original films that inspired this, you’ve probably been waiting years for the next installment of these franchises (even longer in the case of Predator), and you’ll take anything you can get. AVP is better than the last two Alien films and it’s way better than Predator 2. Call this one a home video monster flick classic.

Posted by Leroy Douresseaux at 7:48 AM