Not Enough of "the crazies" in "The Crazies" 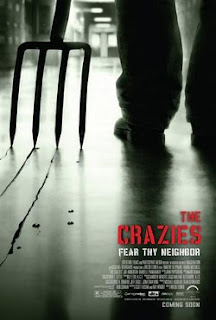 Released this past February, The Crazies is a remake of a 1973 film by famed horror movie director, George A. Romero (Dawn of the Dead). Romero’s film was both a thriller and also a satire of military and governmental bureaucracies. The Crazies 2010 is a standard horror movie thriller with the proper horror movie mood. However, the film doesn’t focus on a single, solid adversary or villain, someone or something that would be a steady menacing presence against the heroes.

The story takes place in fictional Ogden Marsh, a picture-perfect, rural American, small town of happy, law-abiding citizens who are farmers and small business owners. Late one afternoon, Pierce County Sheriff David Dutten (Timothy Olyphant) and his deputy, Russell Clank (Joe Anderson), are enjoying a local high school baseball game when one of those happy citizens shows up on the baseball field with a loaded shotgun. David is forced to kill him. Not long afterwards, another man sets his house on fire, burning to death his wife and young son in the process.

David suspects that something is turning the citizens of Ogden Marsh into depraved, blood-thirsty killers who can and will use any instrument to brutally murder their neighbors. The nonsensical violence is escalating and Ogden Marsh is falling apart when a mysterious military force storms into town. As heavily armed soldiers wearing gas masks round up the people of Ogden Marsh, David and Russell gather David’s wife, Judy Dutten (Radha Mitchell), and a young woman named Becca Darling (Danielle Panabaker). The quartet is trying to escape certain death, either caused by the military or at the hands of “the crazies,” the people infected by the mysterious virus, “Trixie.”

The Crazies is a perfectly competent film, but it wants to be two films – a horror movie and an action thriller. The original movie was also like two films – a military drama and an escape movie. The Crazies 2010 is an escape movie focusing on Sheriff Dutton and his three companions as they try to avoid the military (primarily). It is also a kind of zombie movie (secondary) with the crazies as the zombie-like killers. The problem is that the film never gives us enough of either the military or the crazies, with the crazies being the better of the two.

There are some chilling moments involving the military (which is largely faceless), especially early on when the soldiers roundup the citizens. The truly frightening moments, however, are with the crazies, who are like the infected in 28 Days Later, except the crazies aren’t mindless. They’re homicidal and so damn scary, and when they show up, the film delivers some brilliant moments of screen horror. It is fine that this new film is faithful to the 1973 one, but this film does not do what the advertisements for it promised – give us a movie about a small band of survivors fighting to escape the crazies.

And the characters aren’t that interesting. They’re largely stock characters, and the script really doesn’t give any depth even to the ones with potential – David, Judy, Russell, and Becca. The Crazies has the right mood and scary sequences, but as a horror movie, it largely misses the potential of its best assets – the crazies.

Posted by Leroy Douresseaux at 11:24 AM