"The Dead Sleep" a Ghost Story 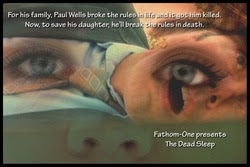 FANTASY/DRAMA/MYSTERY with elements of crime and horror

The Dead Sleep is an independent, straight-to-video supernatural drama released on DVD sometime this past February. Part twisty ghost story and part mystical crime caper, The Dead Sleep focuses on a dead man breaking all the post-death rules to save his daughter.

Paul Wells (Chris Armstrong) lives a quiet suburban life with his wife, Claire (Tatiana Armstrong), and his teenage daughter, Melanie (Sarah Foret). An accountant, Paul even thinks that his crime against the company for which he works has gone unnoticed, until his coworker and buddy, Del Craine (Rob Fente) informs him otherwise. Now, Paul has to make things right with his new boss, Tim (Joshua Close).

That’s a lot going on for a man whose body has been in the grave for five years. Now, Paul wanders the largely silent boundary between life and death, trying to figure a way to save his daughter from a fate similar to his own. As he witnesses the consequences of his transgressions, Paul realizes that he may have to die all over again to save his family.

The Dead Sleep has some similarities to the work of screenwriter Bruce Joel Rubin, specifically Ghost and Jacob’s Ladder. However, Paul Wells is not the kind of unreliable, dead lead character of films like Jacob’s Ladder, Marc Forster’s Stay (2005) or The Sixth Sense. Director Vicki de Mey and screenwriter James A. McLean seem determined to play it fairly straight in spite of the script’s shifts in time and down-the-rabbit-hole moments. The Dead Sleep, regardless of it supernatural and fantastical elements, is ultimately a story about a man and his dedication to his family.

As a low-budget, independent, fantasy flick, The Dead Sleep could have been a disaster because of poor special effects, but with a little imagination, some clever blocking, and savvy location shooting, this film presents a surprisingly quiet and unspectacular, but unsettling ghost world. Add in a few shimmering “collectors,” and the film has the requisite boogeyman that keeps the audience on edge because they never know when a monster will jump out from around a corner.

At times, The Dead Sleep seems like a semi-professional production. The story is too slow in developing and the pacing is not smooth. The acting is uneven, and the lead, Chris Armstrong, and supporting actor, Rob Fente, give performances that are often awkward, although sometimes surprisingly affecting. What ultimately elevates this movie is that the story, which sells the idea that Paul Wells is indeed dedicated to doing anything to save his daughter, Melanie. In their scenes together, we can believe that Melanie is precious to Paul and that he is his daughter’s hero.

In spite of its inherent flaws, The Dead Sleep proves that a ghost story doesn’t have to go bump in the night to get at a viewer’s heart.