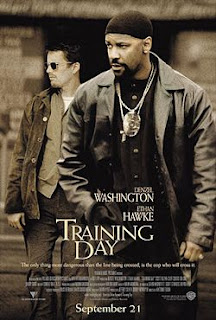 Training Day begins with Jake Hoyt (Ethan Hawke), a young cop of 19 months, earns an assignment to the narcotics division under the tutelage of Harris. From the get go, Harris is rude and crude to Hoyt, and before long Harris takes Hoyt on a whirlwind tour of the seamy underbelly of L.A. County: gang neighborhoods, slums, drug dealing, and police corruption. But a recent miscue haunts Harris, and his attempt to get from under the cloud his carelessness has earned him brings the movie to its abrupt, brutal, and violent end. All the while, Hoyt struggles to maintain his law-abiding nature.

Washington is shocking, brilliant and intense as the dirty cop Harris. Known for playing clean policemen, upright detectives, and uplifting African-American heroes, Washington’s turn as a villain will wake people up to this artistic diverse resume. That he is one of the great actors of the last 15 years in not debatable. The passion that he brought to his role in The Hurricane, he brings here, and one can see passion in his eyes, in his gestures, and in the way he carries himself. It is the most invigorating character Washington has played since The Hurricane.

Hawke remains a player of mostly melancholy characters for which one can feel the deepest sympathy. He is an everyman with matinee idol good looks and charm, although it’s hard to accept his character late in the movie as Hoyt vengefully stalks Harris. He isn’t miscast; the movie just goes slightly awry, focusing on Harris’s evil rather than Hoyt’s coming of age as a policeman.

Antoine Fuqua (the director of the clumsy The Replacement Killers) brings the eye he used as a director of music videos to the film, but with the sensibility to follow a longer, more coherent story than is usually found in videos. Training Day’s pace is steady and breezy, and doesn’t start to stumble until the last quarter.

This isn’t entirely his fault. David Ayer, a rising screen writing star (U-571, The Fast and the Furious) convinces us until the last fifteen minutes or so of this film that Harris will get away with it. Harris’s ideology isn’t entirely unacceptable to mainstream audiences. If his believe system works and keeps the streets clean, most citizens would be happy as long as the could keep their hands clean and the truth buried so that they never have to deal with him and look the other way. It must be Ayers’s goody-two shoes nature that resolves things in the direction in which he does. It is sometimes nice when a movie eschews a happy ending, and the happy ending is usually positive, even when negative would have been more believable. This time the happy ending would have been the ugly truth, and this movie deserved a happy ending.

Not to reveal too many things, but with a deadline looming to save his life, Harris wouldn’t have stopped for a dalliance.

An entertaining cop flick, Training Day is good look at excellent work from a very talented actor, Washington. It may come across as harsh for those who like him as a romantic, good guy leading man, but it’s great for those who want a tour de force from a screen artist.