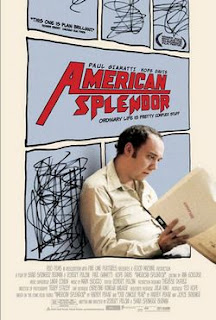 DRAMA with elements of animation, comedy, and documentary

American Splendor is a film based upon the comic book of the same name, and the comic is about its author, Harvey Pekar’s, everyday humdrum life – his sufferings, the annoyances, and just getting by while winning a few skirmishes in the war called existence. See where this is going? Splendor is pretty downbeat, but one can’t help but wonder if Harvey wants to miserable. Though the film isn’t plot-centered, it’s a series of short tales with eccentric characters as the glue that holds the movie.

Splendor is a fairly interesting movie, but it’s certainly nothing I fell in love with. And despite being a 2003 critical darling, I don’t think it’s one of “the year’s best films.” Paul Giamatti does a fairly decent impersonation of Pekar, but it’s not a standout performance. I figure that he could have done this acting job in his sleep. Although I’m fairly familiar with Pekar’s work and have seen the man on TV several times, I don’t know much about his wife Joyce Brabner, though I’ve seen pictures of her. I must say that Hope Lange who plays Ms. Brabner is wishful thinking in casting because Ms. Lange turns the rather ordinary Ms. Brabner into an attractive, intriguing, and quirky matinee beauty.

The movie’s technique is a combination of film drama, documentary (where the audience gets to see the real Pekar, Brabner, and some of their associates), and animation. Several times in the film, comic book-like drawings and actual comic book art act as backdrops to the main story. It’s neat (though not original), and frankly they should have done it more. That would have made the film stand out. As it is, American Splendor is an odd oddball, not really artsy and more like something peculiar made palatable for mainstream tastes. The film is more interesting than entertaining – more than mildly interesting and above average, but well short of attaining the excellence it should have.