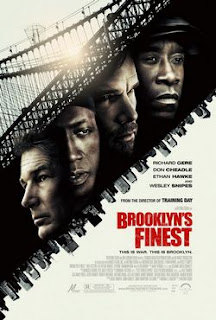 Brooklyn’s Finest follows three veteran New York cops struggling with right and wrong. Cynical, washed-up Edward “Eddie” Dugan (Richard Gere) stopped caring about the job or the rules years ago. Days from retirement, he finds himself overseeing rookies who will be assigned to tough neighborhoods. Detective Salvatore “Sal” Procida (Ethan Hawke) is desperate for money to support his growing family, so he starts taking money he finds during drug busts. Deeply religious, he struggles to reconcile his criminal deeds with his family’s needs, but with a down payment on a bigger house due, he plots his most dangerous cash-grab yet.

Clarence “Tango” Butler (Don Cheadle) is an undercover narcotics officer who hopes his latest assignment will earn him a promotion to detective and a desk job. However, he must betray Casanova “Caz” Phillips (Wesley Snipes), a prison buddy just released from prison on appeal of his conviction. A vulgar federal agent demands that Tango set up a drug deal that will assure Caz’s return to prison, but that causes Tango to be torn between his conflicting loyalties – the job and his friend. Eddie, Sal, and Tango converge on the Van Dyke housing projects of Brooklyn’s notorious Brownsville section where their lives will change forever.

Brooklyn’s Finest is a sprawling crime drama that offers good characters and a good setup, but it never really develops. The characters are the kind of stock players found in movies dealing with the New York City Police Department and Big Apple crime: cynical cops, dirty cops, vulgar cops, asshole cops, compromised cops, bureaucratic cops, arrogant federal agents, prostitutes, wannabe gangsters, and drug dealers. Plus, there are shootings – lots and lots of shootings. Although Brooklyn’s Finest is his first screenplay, writer Michael C. Martin actually seems as if he is going to do something grand, if not different, with this story and these characters. However, he eventually writes himself into a corner, where violent death is the only resolution, so the movie ends up seeming so predictable. Martin develops everything slowly, as if this were a pilot for a television series, when it really is a movie screenplay. Martin just builds and builds, and before the plot can thicken, it’s time for the story to end. And the only way left to end this is by using good old mister shoot ‘em up.

The performances by the three leads are good, if not great. Richard Gere is so real as the cynical, burned-out Eddie that the character seems weird and out of place. The best acting comes from the supporting players. Wesley Snipes is pitch perfect as the old dog gangsta; Snipes shows it in his face that Caz is tired and out of place among the younger, harder, and more brutal drug dealers. The talented Brian O’Byrne is excellent as the way too underutilized character, Officer Ronny Rosario. Ellen Barkin reminds us how good she is as the ball-busting Federal Agent Smith, a part Barkin plays as if she has a chip on shoulder and dynamite up her ass. Someone should give Smith her own movie because the disappointing Brooklyn’s Finest is not worthy of the character.