Original "Insomnia" Both Cold and Engaging 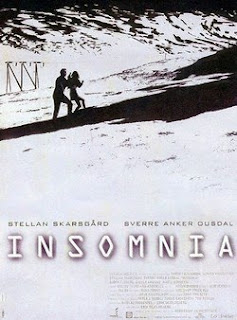 DRAMA/MYSTERY with elements of crime

The thriller film, especially the kind mixed with the element of a murder mystery, is a venerable Hollywood genre. Seeing a foreign version of such a genre can be a jarring experience. Lacking the star power wattage, lavish production values, and the insistence that the screenplay explain every bit of action and leave no sense of mystery (not to mention the never-ending public relations campaigns to promote movies), many foreign films must rest the case for their quality on the art and technique of filmmaking and on storytelling free of high concepts. That is exactly the case with the Norwegian film Insomnia.

Two detectives cross the Arctic Circle into northern Norway to solve the murder of a young girl, Tonya Lorentzen (Maria Mathiesen), where during the summer daylight lasts for 23 hours. Jonas Engstrom (the sublime Stellan Skarsgard, Good Will Hunting) is the best at what he does, catch murderers, and with his partner of one year, Erik Vik (Sverre Anker Ousdal), Jonas guesses that he himself will quickly solve the crime.

The investigators find Tonya’s friends and classmates reluctant to cooperate, and Jonas, who is a Swede, has a tough time communicating with them. Initially Jonas and Erik suspect Tonya’s boyfriend Eilert (Bjorn Moan), but he is merely a distraction. The murderer, who took time to clean his crime scene, is someone smart. During a stakeout at the crime scene to catch the killer, Jonas accidentally shoots and kills Erik, mistaking him for Tonya’s killer, who did, in fact, walk right into the police’s trap.

Rather than admit his mistake, Jonas covers the shooting of his partner, blaming it on the killer. He soon learns that Tonya’s killer witnessed Jonas’s mistake. Now, as the police move in on the Tonya’s murderer, Jonas must protect him, cover up his own crime, and frame someone else. Meanwhile, Jonas grows steadily exhausted; in the near perpetual daylight, he cannot sleep, and his reality blurs just as his web of deceit becomes more desperate. And a bright, local detective assigned to Erik’s killing begins to find the flaws in Jonas’s story.

Directed by Erik Skjoldbjaerg and co-written with Nikolaj Frobenius, Insomnia is a quite, but intense thriller that harks back to old Hollywood. The location, the setting, and every character are important to the tapestry of the story. However, it is Skarsgard who owns the film; greasy and sullen, he stalks his sleepless world trying to save himself, his sense of self worth, and his sense of justice.

There are subtle shifts, sans special effects, in reality, or at least, in Jonas’s perception of it. His lack of sleep allows his dilemmas to incessantly haunt him. Because the thriller is told from his point of view, the audience must share Jonas’s vague and murky world. It is a testament to Skarsgard’s skill that he can draw us inescapably to his character.

The other great character is Tonya’s killer. Although the police peg him as suspect early on, we see him mainly through Jonas’s eyes. His relationship with Jonas should be troubling, and he is a murderer. But like Jonas, the audience is drawn to him. Why? There seems to be so many reasons that this killer makes us curious and dare I say…sympathetic.

Insomnia has a sense of vagueness that can be off putting at time, and the creators are somewhat clumsy with the filmmaking as the moves to its resolution. It is still a very good film - one that demands its audience’s participation and attention, all the while burying us in a world of ambiguity. It was fun to be entertained and to feel like a part of this story; I wish it happened more often.