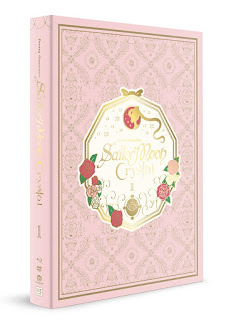 Popular Updated Anime Series Based On The Classic

With these new home media releases, audiences can enjoy the action of the first 14 episodes of the acclaimed reboot of the classic anime series based on Naoko Takeuchi's original Sailor Moon manga series along with a host of notable bonus features.

“The saga of Sailor Moon and her band of legendary interstellar guardians is wonderfully updated for a new generation of fans in SAILOR MOON CRYSTAL and we are proud to deliver the first home media release for the new series,” says Charlene Ingram, Senior Marketing Manager, Animation. “We know many new viewers along with fans of the original series have anticipated this release and they will be delighted with the crisp HD presentation and the many extra features we also included.”

Naoko Takeuchi’s landmark series, Sailor Moon, returns for a new generation! SAILOR MOON CRYSTAL tells the story of Usagi Tsukino, an awkward teenage girl whose life is turned upside-down when she becomes Sailor Moon, guardian of justice and the Legendary Silver Crystal. With Tokyo under constant threat from the dark forces of Queen Metalia, Usagi’s arrival couldn’t have come at a better time. And luckily, she won’t have to do it alone! Other Sailor Guardians are awakening to join in the fight and help Usagi answer the biggest question of all: What power does the Legendary Silver Crystal hold?

Posted by Leroy Douresseaux at 3:42 PM