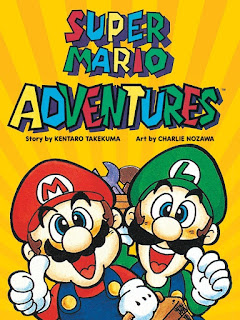 San Francisco, CA – VIZ Media, LLC (VIZ Media), a premier company in the fields of publishing, animation distribution, and global entertainment licensing, prepares to deliver two fresh doses of video game-inspired manga excitement as it announces the acquisition of the publishing rights for the classic series SUPER MARIO ADVENTURES, as well as THE LEGEND OF ZELDA: TWILIGHT PRINCESS, the latest manga title inspired by the beloved ‘80s-era video game title.

SUPER MARIO ADVENTURES is set for release in October 2016 of this year; THE LEGEND OF ZELDA: TWILIGHT PRINCESS is scheduled to launch in March 2017.

SUPER MARIO ADVENTURES · Available October 2016
Long out of print, this stunning, full-color graphic novel features a story by Kentaro Takekuma and art by Charlie Nozawa, and will become available once again for the first time in more than 20 years!! Super Mario Adventures, inspired by the bestselling Super Mario™ video game franchise, is a collection of comics that originally ran in Nintendo Power™ magazine in 1992-93.

The peril-plagued Princess Toadstool is kidnapped by the diabolical deadbeat Bowser™ but super plumbers Mario™ and Luigi™ hatch a plan with their new friend Yoshi™ to rescue her. Are the Super Mario Bros’ plans a pipe dream? Can they stop the Koopa King before he forces the Princess to be his bride?!

THE LEGEND OF ZELDA: TWILIGHT PRINCESS · Available Spring 2017
The newest series from THE Legend of Zelda manga creator Akira Himekawa continues the fantastic adventures inspired by the video game of the same name and is set for an English debut in March 2017.

Posted by Leroy Douresseaux at 6:46 AM