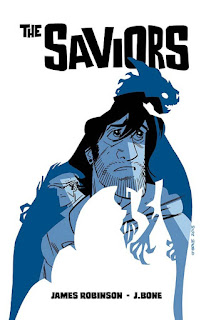 THE SAVIORS HAVE ARRIVED

When Tomas Ramirez stumbles upon an extraterrestrial conspiracy to take over the world, his life is forever altered. Now he’s banding together with those other few souls who share the knowledge that we are under attack as they attempt to defeat a shadowy alien cabal that is both indestructible and eager to kill anyone who threatens it.

PRAISE FOR THE SAVIORS:

“THE SAVIORS is a high-quality, slyly modern take on some sci-fi B-movie concepts. Come for the fun of the chase—stay for the superlative J. Bone cartooning, which is classically good in every way.” —Multiversity Comics

“This is a truly unique book, and an exceptionally fun read.” —TM Stash

“A little bit classic sci-fi thriller throwback and part visionary exploration of a concept nearly as old as fiction itself.” —Comic Book Resources