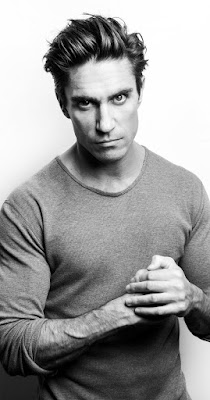 For decades, Floyd Lawton was a name that was only known to avid comic book fans. That's no longer the case, as Floyd Lawton and his alter-ego Deadshot are now known to millions of people around the world, thanks to Michael Rowe's charismatic portrayal of the anti-heroic Suicide Squad leader on the hit CW series Arrow.

A native of St. John's, Newfoundland, Canada, Michael's first passion in life was music. But after ten years as songwriter and drummer for the metal/punk band Bucket Truck - who shared the stage with the likes of Green Day, Slayer, and D.O.A - Michael found himself at a crossroads. The breakup of his band sent Michael west to Vancouver where his brother Andrew was starting out as a filmmaker. Without any prior experience, Michael began producing and performing in short comedy films written and directed by his brother. Their 2012 short film Sleepy Stories became a film festival favorite, screening in Vancouver, Halifax, Whistler, and the Czech Republic.

Acting became a new passion for Michael and, after a year of honing his craft at Vancouver's Actor's Foundry, he broke through to mainstream success when he landed the recurring role of Deadshot in 2012. His background in comedy allowed him to bring a unique and darkly offbeat energy to his performance, which has led to his character becoming a fan favorite.

Michael continues to prioritize working on independent projects with his brother. He's set to produce and act in Andrew's debut feature film, which is currently in development.

"The CW has created an amazing universe, and Michael has helped to flesh it out even more than it already was," said Marc Nathan, promoter of the Baltimore Comic-Con. "We're excited to have him with us in 2016, and fans of DC's television universe will be too!"

press@baltimorecomiccon.com - for any general press inquiries or to be added to our PR distribution

registrar@baltimorecomiccon.com - for inquiries about submitted registrations

harveys@baltimorecomiccon.com- for the Harvey Awards ceremony and banquet

About The Hero Initiative
The Hero Initiative is the first-ever federally chartered not-for-profit corporation dedicated strictly to helping comic book creators in need. Hero Initiative creates a financial safety net for yesterday's creators who may need emergency medical aid, financial support for essentials of life, and an avenue back into paying work. It's a chance for all of us to give back something to the people who have given us so much enjoyment. Since its inception, The Hero Initiative has had the good fortune to grant over $950,000 to the comics' veterans who have paved the way for those in the industry today. For more information, visit www.heroinitiative.org or call 626-676-6354.