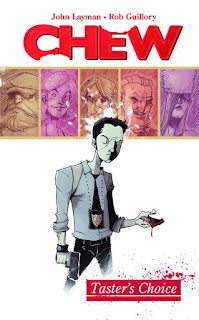 Chew is an ongoing comic book series from writer John Layman and artist Rob Guillory.  Published by Image Comics, Chew became an immediate hit, selling out, and earning critical acclaim.  By the end of its first two years of publication, the series had won two Will Eisner Comics Industry Awards (Eisners), including “Best New Series” (2010).

The first five issues of Chew are collected in the trade paperback, Chew, Vol. 1: Taster's Choice.  This first collection of the hit series includes, of course, Chew #1 (cover dated: June 2009), which introduces Philadelphia Police Department Detective Tony Chu, a cop with a weird secret.  Tony is “cibopathic,” which means that he can get psychic impressions from whatever he eats or tastes.

If he eats an apple, Tony sees images that can tell him about the tree from which the apple came, what pesticides were used on that tree, or even when that apple was harvested.  Or Tony can eat a hamburger, and the pictures that appear in his mind could be a replay of when the cow was… harvested.

In the world of Chew, poultry is illegal because chickens were blamed for a bird flu epidemic that killed 23 million people in the United States and 116 million worldwide.  Tony and his partner, John Colby, stumble upon a black market poultry operation.  By the end of it, Colby is grievously wounded and Tony commits a shocking act of cannibalism.  Tony is recruited by the U.S. Food and Drug Administration (F.D.A.) to join its Special Crimes Division.  He is matched with a new partner, the loquacious Mason Savoy.  Suddenly, cannibalism is the least of Tony's problems.

Of the many things that work successful with Chew, I think the fact that Tony Chu's life becomes more complicated is probably what keeps the series fresh and hopping.  Writer John Layman shows off his imaginative and inventive sides, producing plots which reveal that things are both what they seem and not what they seem.  The expected and unexpected are fickle lovers with a bad sense of timing where Tony Chu is concerned.

Layman also gives Chew a wicked sense of humor that plays on cop fiction stereotypes – the by-the-book newcomer (Tony to the F.D.A.), the wise old bull of a partner (Mason Savoy), and the legion of criminal enterprises, street hoods, and assorted lowlifes.  Yet Layman's depiction of a world of government corruption, bureaucratic putrefaction, and institutional decay make Chew not only timely, but also timeless.  Chew is imaginative science fiction as a satire of our society for all seasons.

In artist Rob Guillory, Layman has found the proverbial perfect man.  I can imagine another artist drawing Chew, but I do not believe that anyone but Guillory could be the series' conceptual designer or its graphical storytelling guide.  Chew would not be Chew without Guillory anymore than Pixar would be what it is without John Lassetter.

I have revisited the beginning of Chew, so that I could start over and move onto what I have not read.  Unless it has experienced a tremendous fall-off, it is one of the best comic books of the past decade.

Posted by Leroy Douresseaux at 6:20 AM