Haikasoru Announces the Supernatural "The Gates of Sorrows" 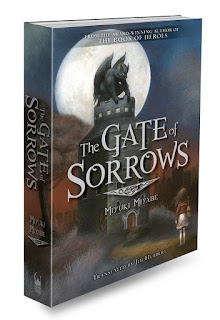 THE GATE OF SORROWS is an adult sequel of sorts to Miyabe’s young adult novel, THE BOOK OF HEROES, but it can be read as a standalone work. THE GATE OF SORROWS is available in-print with an MSRP of $26.99 U.S. / $29.99 CAN. The novel is also available digitally for the Amazon Kindle, Apple’s iBooks Store, Barnes & Noble’s Nook Book Store, the Kobo eBooks Store, and the Google Play store.

In THE GATE OF SORROWS, a series of murders shocks Tokyo’s Shinjuku ward, but Shigenori, a retired police detective, is instead obsessed with a gargoyle that seems to move. College freshman Kotaro launches a web-based investigation of the killer, and comes to find that answers may lie within an abandoned building in the center of Japan’s busiest neighborhood, and beyond the Gate of Sorrows. In this adult sequel to Miyabe’s The Book of Heroes, you will meet monsters from other worlds and ordinary horrors that surpass even supernatural threats.

“Miyuki Miyabe is one of Japan’s most celebrated contemporary authors and we are honored to expand our catalog of her works with the release of THE GATE OF SORROWS,” says Nick Mamatas, Editor. “Miyabe is an extraordinary author with a wide and very diverse oeuvre, and her latest work adeptly blends the tension of a crime thriller with tinges of the fantastic world of the supernatural. We look forward to readers discovering this unique latest release from Haikasoru.”

Miyuki Miyabe is a popular and widely acclaimed author who has published works across a variety of genres ranging from sci-fi, historical fiction and mystery to young adult thrillers and social commentary. The Haikasoru imprint has released several of Miyabe’s works including BRAVE STORY, THE BOOK OF HEROES, ICO: CASTLE IN THE MIST, and APPARITIONS: GHOSTS OF OLD EDO.

Author Miyuki Miyabe's first novel was published in 1987, and since then she has become one of Japan's most popular and best-selling authors. In 2007, Miyabe's novel, BRAVE STORY (also published North America by Haikasoru), notably won the Batchelder Award for Best Children's Book in Translation from the American Library Association. Her fantasy novels ICO: CASTLE IN THE MIST and BRAVE STORY are also available from VIZ Media’s Haikasoru imprint, as is the short story collection APPARITIONS: THE GHOSTS OF OLD EDO.

For more information on THE GATE OF SORROWS and the Haikasoru imprint, please visit www.haikasoru.com.

For more information on other titles available from VIZ Media, please visit www.VIZ.com.