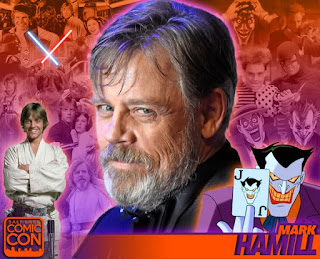 SALT LAKE CITY--(BUSINESS WIRE)--The Force will be strong at the Vivint Smart Home Arena as Salt Lake Comic Con 2016 (http://saltlakecomiccon.com/) announced that the Mark Hamill panel will be held at the arena on Thursday, September 1, 2016.

Vivint Smart Home Arena is home of the National Basketball Association’s (NBA) Utah Jazz. It seats 19,911 basketball fans and more than 20,000 for concerts. Since opening in October of 1991, the venue has hosted Olympic events during the Olympic Winter Games of 2002, concerts, arena league football, professional wrestling, hockey, motocross events, rodeos and a host of other events and activities.

Earlier this month, Salt Lake Comic Con announced that Mark Hamill is making his only U.S. comic con appearance in 2016 at Salt Lake Comic Con 2016. Hamill is best known for his role as Luke Skywalker in Star Wars episodes IV-VI and most recently Star Wars VII: The Force Awakens. He has a leading role in Star Wars VIII, the upcoming epic space opera. He’s also a voice actor and the most popular voice of the Joker, beginning with Batman: The Animated Series and most recently as Batman: The Killing Joke.

Since announcing Hamill, fan response has been beyond stellar. The first round of photo ops and autograph packages sold out in record time and fans have been wanting more access to Mark Hamill, best known as Jedi Master Luke Skywalker and the Joker, the Clown Prince of Crime. He joins over 200 celebrity guests, voice actors, authors, comic creators, panelists, cosplayers, features and other entertainers across multiple fandoms and Xperiences for the 4th Annual Salt Lake Comic Con 2016.

“We’re excited that Mark is coming to Salt Lake Comic Con and know our fans are ecstatic too. But the response has been so strong that we had to do something to enable more fans to participate and experience Mark Hamill, one of the most important figures in the Star Wars Universe,” said Dan Farr, Salt Lake Comic Con Founder and Show Producer. “Our goal is to make all our fans dreams come true, and given fan response and input, we knew we needed to do something big. We had to make sure more fans had the experience they desired with Mark, and we’re happy that we could partner with Larry H. Miller Sports & Entertainment and Vivint Smart Home Arena to more than quadruple the amount of seating for fans at Mark’s panel.”

The panel will begin at 11:00 a.m. (time subject to change) on Thursday, September 1. For a complete schedule and to secure tickets to Salt Lake Comic Con 2016, which provide free entry to this panel, visit the Salt Lake Comic Con website. Anybody with a Salt Lake Comic Con ticket or press badge can get into the arena; details of final schedule and queuing will be available on the website next week on Mark Hamill’s guest page. A limited number of Mark Hamill Super Fan Packages are available here that include a photo op, pre-signed autograph, collectible badge and lanyard, and first entries into the panel.

“Mark Hamill is one of the most iconic stars of now three generations,” said Bryan Brandenburg, Salt Lake Comic Con Co-Founder and Chief Marketing Officer. “To have him at our convention is an honor. More and more celebrities of his caliber want to come to Salt Lake Comic Con to meet and engage with our amazing fans. It’s a tribute to this community that we’ve made Salt Lake City one of the premier comic con destinations in the world. We’re expecting Mark’s panel not only to be his largest live audience, but also the most attended celebrity panel in comic con history.”


ABOUT SALT LAKE COMIC CON:
Salt Lake Comic Con is organized by Dan Farr Productions, in partnership with ABC4/CW30 of the Nexstar Broadcasting Group and was co-founded by Dan Farr and Bryan Brandenburg. Dan Farr Productions is an event and marketing group devoted to organizing events, launching and acquiring new shows, and partnering with premium celebrities and brands in the pop culture arena. Dan Farr Productions is dedicated to producing spectacular celebrations of popular culture that lead the market in providing exceptional and rewarding experiences for our consumers, fans, celebrity guests, vendors and partners. Find out more at: www.SaltLakeComicCon.com, www.abc4.com/.

Posted by Leroy Douresseaux at 5:18 PM