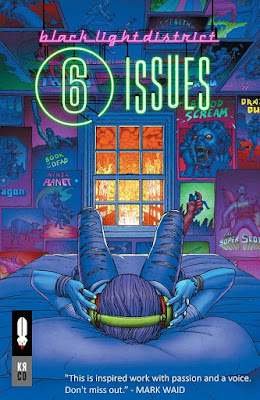 BLACK LIGHT DISTRICT: COMICS AND MUSIC TO SAVE THE WORLD

Jesse Blaze Snider and co-writer/producer Will Knox’s groundbreaking online comic book/music anthology will appear in print for the very first time this October 2016 from Image Comics.

“This [project] is a love letter to comics, said Snider. “These are the most personal songs I’ve ever written—while they’re superhero metaphors, I think they’ll be personal to everybody, because they’re based in emotions I think everyone has felt.”

In BLACK LIGHT DISTRICT, comics and music come together to tell six separate stories with one thing in common: everything is at stake.

"Jesse gave us a melody and lyrics for inspiration, then just let us do what we do,” said Woodward. “It was not only one of my favorite creative experiences, but, in my opinion, my best sequential work produced to date.”

Hester added: "Working on Madhattan with Jesse, Erik [Larsen], and Chris [Eliopoulos] was a joy.”

"I can't think of a time I've worked harder or been more filled with the spirit of inspiration than working on this cover,” said Burnham. “I can comfortably look at this piece and know in my heart that PummelHorse was me at my all time peak.”