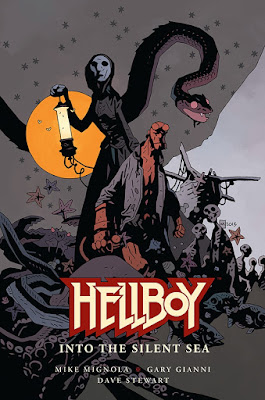 ORIGINAL “HELLBOY” GRAPHIC NOVEL TO BE PUBLISHED IN 2017

Following the events of the classic story “The Island,” Hellboy sets sail from the wreckage of a deserted island only to cross paths with a ghost ship. Taken captive by the phantom crew that plans to sell him to the circus, Hellboy is dragged along by a captain who will stop at nothing in pursuit of a powerful sea creature.

Gary Gianni has previously collaborated with iconic writers including George R. R. Martin, Harlan Ellison, Ray Bradbury and Michael Chabon and teamed up with Michael Kaluta to work on the classic pulp hero, The Shadow. Gianni is best known the creator of the Monstermen series, which appeared as a back-up feature in Hellboy. He also illustrated Prince Valiant, the syndicated newspaper comic strip, for 8 years. Gianni will illustrate Hellboy: Into the Silent Sea, with colors by Dave Stewart; Mignola will provide a cover, with colors by Stewart.

"I imagine if Hellboy: Into the Silent Sea were a movie, the Hollywood hyperbole would describe it as Hellboy's greatest adventure,” said Gary Gianni. “Yes... it's Hellboy as you've never seen him before, laughing , loving and battling his way across the stormy seas! You'll be thrilled as he faces cosmic forces terrorizing a haunted ship manned by a desperate crew! Be sure not to miss Hellboy: Into the Silent Sea, the biggest comic book event of the year!"

Hellboy: Into the Silent Sea is the third Hellboy original graphic novel, following the classics, Hellboy: House of the Living Dead by Mignola, Richard Corben and Stewart (2011) and Hellboy: The Midnight Circus by Mignola, Duncan Fegredo and Stewart.

Pre-order Hellboy: Into the Silent Sea on Amazon and Penguin Random House.

About Gary Gianni
Gary Gianni graduated from The Chicago Academy Of Fine Art in 1976. From there, he worked for the Chicago Tribune as an illustrator and Network Television News as a courtroom sketch artist. His artwork has appeared in numerous magazines, children's books and paperbacks. 1990 marked his debut in the illustrated graphic novel field with adaptations of The Tales of O. Henry and 20,000 Leagues Under The Sea for the Classics Illustrated series. In 1997 collaborating with Archie Goodwin, his illustrations won him The Eisner Award for Best Short Story, Heroes, in Batman: Black And White, for DC Comics. At Dark Horse Comics, he wrote and drew Indiana Jones and The Shrine Of The Sea Devil, collaborated with such major writers as Harlan Ellison and Andrew Vachss and teamed up with Michael Kaluta to work on the enduring pulp hero, The Shadow. He is the creator of The Monstermen Mysteries which ran as a backup feature in Mike Mignola's Hellboy. In 2015 Gianni illustrated the New York Times bestselling A Game of Thrones, A Knight of the Seven Kingdoms, written by George R.R. Martin. The  prequel is part of Martin's ongoing Game of Thrones masterwork, A Song of Ice and Fire.  3 volumes by Robert E. Howard featuring Conan, Solomon Kane and Bran Mak Morn are novels also illustrated by Gianni.

About Mike Mignola
Mike Mignola’s fascination with ghosts and monsters began at an early age; reading Dracula at age twelve introduced him to Victorian literature and folklore, from which he has never recovered. Starting in 1982 as a bad inker for Marvel Comics, he swiftly evolved into a not-so-bad artist. By the late 1980s, he had begun to develop his own unique graphic style, with mainstream projects like Cosmic Odyssey and Batman: Gotham by Gaslight. In 1994, he published the first Hellboy series through Dark Horse. As of this writing there are twelve Hellboy graphic novels (with more on the way), several spinoff titles (B.P.R.D., Lobster Johnson, Abe Sapien, and Sir Edward Grey: Witchfinder), prose books, animated films, and two live-action films starring Ron Perlman. Along the way he worked on Francis Ford Coppola’s film Bram Stoker’s Dracula (1992), was a production designer for Disney’s Atlantis: The Lost Empire (2001), and was the visual consultant to director Guillermo del Toro on Blade II (2002), Hellboy (2004), and Hellboy II: The Golden Army (2008). Mignola’s books have earned numerous awards and are published in a great many countries. He lives somewhere in Southern California with his wife, daughter, and cat.