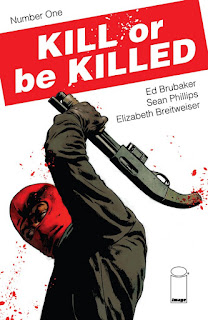 KILL OR BE KILLED MARKED FOR SUCCESS

The first issue is rushed to a second printing

“When Ed Brubaker, Sean Phillips and Elizabeth Breitweiser get together, good things happen. Their latest collaboration looks to continue that winning streak, the debut propelled by its unique premise and solid early characterization.” —IGN

The bestselling team of Ed Brubaker and Sean Phillips (THE FADE OUT, CRIMINAL, FATALE) have hit the mark again with another hot new crime series in KILL OR BE KILLED. Image Comics is pleased to announce that the first issue is being rushed to a second printing in order to keep up with increased customer demand.

KILL OR BE KILLED follows a young man who is forced to kill bad people and how he struggles to keep his secret as it slowly ruins his life and the lives of his friends and loved ones. Both a thriller and a deconstruction of vigilantism, KILL OR BE KILLED is a departure from Brubaker and Phillips’ noir roots and is unlike anything the creative team has ever done.

Nerdist called the series: “So much darker and more twisted than anybody guessed. It’s also freaking glorious and an awesome first issue of a promising new series.”

Posted by Leroy Douresseaux at 11:43 AM