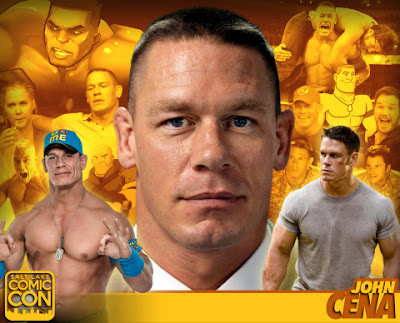 Cena is a WWE Superstar, actor, rapper and reality TV show host. Cena joined the WWE in 2001 and has since become the face of the organization. During his career he has won 24 championships and transcended the industry to become a global icon.

Cena’s movie career includes The Marine, 12 Rounds, Legendary and Trainwreck.. He’s an accomplished musician. His debut album, You Can’t See Me was released in March 2005 by Columbia Records and he has performed five WWE theme songs. Cena’s also involved in a number of charities, including the Make–A-Wish Foundation, granting more than 500 wishes for kids with life threatening illnesses; the most wishes granted in history.

“Having John Cena at Salt Lake Comic Con 2016 is a huge win for our fans,” said Dan Farr, Salt Lake Comic Con Founder and Show Producer. “We know many of our fans are wrestling and WWE fans, but Cena is so such more than a wrestler. He’s an entertainer that has created a huge fan base in film, TV, music and fashion. He understands what it means to interact with his fans and will be a natural fit for comic con and fans of pop culture of all genres.”

Cena is a pop culture fan himself, specifically Japanese anime and lists his favorite anime movie as Fist of the North Star. He’s also a video game fan, particularly the Command & Conquer series.

“We’re confident that John Cena will be a fan favorite and will make a lot of dreams come true for attendees of Salt Lake Comic Con,“ said Bryan Brandenburg, Salt Lake Comic Con Co-Founder and Chief Marketing Officer. “With over 42 million fans on Facebook, he’s one of the most admired pop culture heroes in the world. We’re excited to have Cena join an already stellar lineup and have more high profile guests like him to announce as we get closer to our comic con in September. Like Cena, we never give up and are committed to making our fans’ dreams come true.”


ABOUT SALT LAKE COMIC CON:
Salt Lake Comic Con is organized by Dan Farr Productions, in partnership with ABC4/CW30 of the Nexstar Broadcasting Group and was founded by Dan Farr and Bryan Brandenburg. Dan Farr Productions is an event and marketing group devoted to organizing events, launching and acquiring new shows, and partnering with premium celebrities and brands in the pop culture arena. Dan Farr Productions is dedicated to producing spectacular celebrations of popular culture that lead the market in providing exceptional and rewarding experiences for our consumers, fans, celebrity guests, vendors and partners. Find out more at: www.SaltLakeComicCon.com, www.abc4.com.

Posted by Leroy Douresseaux at 10:10 AM