Image Comics Says Invincible #133 is the Beginning of the End 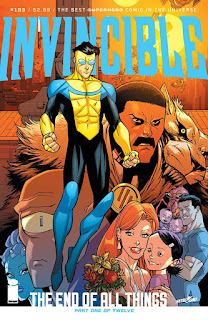 Series artist Ryan Ottley returns to re-team with Robert Kirkman (THE WALKING DEAD, OUTCAST BY KIRKMAN & AZACETA) to launch the final story arc of the long-running creator-owned superhero series INVINCIBLE. “The End of All Things” Part One begins with INVINCIBLE #133 from Image Comics/Skybound Entertainment this November 2016.

This twelve-part mega-story will touch every corner of the Invincible Universe, and when it’s over… It’s over. Every single story for the past thirteen years has been leading up to this ultimate showdown running up to INVINCIBLE #144—the very last issue in the series.

In a letter to fans, Kirkman explained his and Ottley’s decision to end the series. “We’ve got a little over a year to go, and it’s going to be one hell of a year! So please join us for our swan song, thirteen years in the making! We couldn’t have done it without you, the fans, so let’s all cross the finish line together!”

Posted by Leroy Douresseaux at 7:46 PM