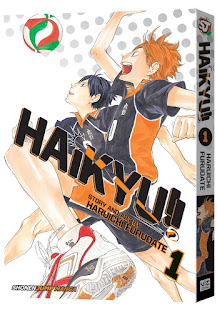 San Francisco, CA – VIZ Media, LLC (VIZ Media), a premier company in the field of publishing, animation distribution, and global entertainment licensing, brings the riveting sports manga HAIKYU!! to English readers with the print and digital launch of the series on July 5th, 2016.

Created by Haruichi Furudate, HAIKYU!! depicts the on- and off-the-court drama of a driven young volleyball player. The series is rated ‘T’ for Teens and will be released under the Shonen Jump imprint with a print MSRP of $9.99 U.S. / $12.99 U.S. HAIKYU!! launches digitally on July 5th on VIZManga.com and also will be available via the VIZ Manga App, as well as from the Nook, Kobo, Kindle, iBooks, comiXology, and Google Play stores. Future editions of the ongoing series will be published in English on a monthly basis until it catches up with its Japanese counterpart.

Ever since he saw the legendary player known as “the Little Giant” compete at the national volleyball finals, Shoyo Hinata has been aiming to be the best volleyball player ever! Who says you need to be tall to play volleyball when you can jump higher than anyone else?

In the opening volume, after losing his first and last volleyball match of his middle school career against Tobio Kageyama, "the King of the Court," Shoyo Hinata swears to become his rival. But what happens when the guy he wants to defeat ends up being his teammate?!

“HAIKYU!! is extremely popular in Japan, where it won the 2015 Shogakukan Manga Award in the Shonen category and continues to sit alongside other top popular series in Japan’s Weekly Shonen Jump magazine,” says Marlene First, Editor. “HAIKYU!! is one of the most requested series by fans and we are very excited to announce its official debut. With its captivating underdog story and high-energy, fast-paced storytelling, HAIKYU!! will keep manga fans on the edge of their seats this summer!"

Manga creator Haruichi Furudate began his manga career when he was just 25 years-old with the one-shot Ousama Kid (King Kid), which won an honorable mention for the 14th Jump Treasure Newcomer Manga Prize. His first dedicated series, Kiben Gakuha, Yotsuya Sensei no Kaidan (Philosophy School, Yotsuya Sensei’s Ghost Stories), was serialized in Japan in 2010 in Weekly Shonen Jump. In 2012, he began serializing HAIKYU!! in Weekly Shonen Jump, where it has become his most successful work to date. HAIKYU!! also has been adapted into a very popular anime series whose 3rd season is set to debut in Japan later this year.

For additional information on HAIKYU!! and other manga titles published in-print and digitally by VIZ Media, please visit www.VIZ.com.