I Reads You Review: American Monster #2 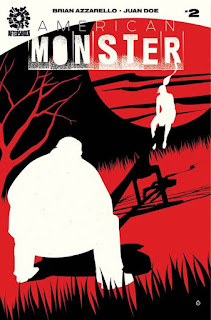 American Monster is a new ongoing comic book series created and written by Brian Azzarello (100 Bullets) and drawn by artist Juan Doe (Joker's Asylum: Scarecrow).  The series is set in a small Midwestern town beset by corrupt cops and violent rural gangs and focuses on the mysterious stranger who arrives in town with mysterious intentions.

American Monster #2 (“Roadkill”) returns to the gang of wayward teens who experienced some “crazy shit” in the first issue.  Meanwhile, Deputy Downs pays a visit to Theodore Montclare, the mysterious stranger, trying to glean some information – any information – from the him.  Soon, Sheriff Josh and roadkill butcher, Felix, will have different experiences with the stranger.

I first encountered Brian Azzarello when I read the first two trade collections of his seminal crime comic book series, 100 Bullets (DC Comics/Vertigo), which he produced with artist, Eduardo Risso.  I believe that the Vertigo that published 100 Bullets no longer exists in any meaningful way.  I doubt that Vertigo would now publish Azzarello's rattlesnake of a comic book, American Monster.  Since AfterShock does not have to worry about offending evangelicals who might stop buying Swamp Thing breakfast cereal and “daisy dukes” sporting the Batgirl emblem, this new publisher can focus on releasing imaginative comics books for mature readers, like American Monster.

Anyway, I met Azzarello years ago at a Mid-Ohio Con and was surprised to find that he was a small-of-stature, unassuming white man.  He writes 100 Bullets, I thought?  Now, American Monster assures me that Azzarello swings a long, thick, uncut imagination.  Each page of American Monster makes me feel that I need a safe place, yet the last page of this second issue is quiet, poignant, and beautifully human.

If Azzarello is eventually imprisoned for American Monster (along with the AfterShock Comics staff), Juan Doe will be right behind him.  Doe's quiet compositions belie a ruthless graphical storytelling style that has no time for being stylish.  I am sure that Doe does not give a damn that the back tattoo featured in this issue turned my blood cold.

[This comic book also includes “21 Questions,” a Q&A between Mark Marts, the Editor-in-Chief of AfterShock Comics and Marguerite Bennet, writer of InSEXts.]

Posted by Leroy Douresseaux at 7:38 AM