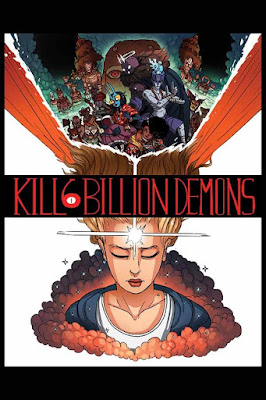 The webcomic phenomenon arrives in print this September

Tom Parkinson-Morgan will release the first chapter of his fan-favorite webcomic KILL SIX BILLION DEMONS in trade paperback this September 2016.

Sorority sister Allison Ruth must travel to Throne, the ancient city at the center of the multiverse, in an epic bid to save her boyfriend from the clutches of the seven evil kings who rule creation.

“This is a project that just gives and gives, and never fails to up the ante.” —The Werd

“Warning: this sumptuous, demon-filled webcomic may break your brain.” —iO9

“Each page is a tour de force of psychedelic imagery.” —The Webcomics Review