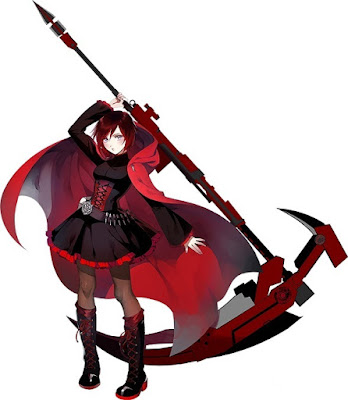 Partnership Kicks Off With Publication of RWBY Manga Title In 2017, With Other Books Based On The Smash Hit Animated Series Forthcoming

San Francisco, CA – VIZ Media, LLC (VIZ Media), a premier company in the fields of publishing, animation distribution, and global entertainment licensing, has announced a partnership with Rooster Teeth, the Austin, TX-based entertainment and media company behind the globally acclaimed animated series RWBY, the first western anime series to be distributed to Japan.

VIZ Media and Rooster Teeth will focus on a variety of publishing formats based on RWBY, starting in 2017.

RWBY is Rooster Teeth’s award-winning anime series that tells the story of four different girls brought together for one legendary purpose. Ruby, Weiss, Blake, and Yang are students at Beacon Academy, an ancient school designed to train the monster-slayers knows as Hunters and Huntresses. Unfortunately, monsters aren’t the only threat in the world of Remnant, and if these girls want to graduate, they’ll have to learn to work together – both on the battlefield and in the classroom.

“The Rooster Teeth-VIZ Media partnership will showcase the strong creative vision and production expertise between our two entertainment companies to expand the vivid and exciting world of RWBY globally in bold new ways that fans will love,” says Beth Kawasaki, Senior Editorial Director for VIZ Media.

“Through the new RWBY titles, readers will discover more about the RWBY universe and delve deeper into the characters and storylines they love, as well as go on all new adventures,” said Rooster Teeth Head of Animation Gray G. Haddock. “We are thrilled to be working with VIZ Media to bring such beautiful books to RWBY’s audience.”

Rooster Teeth has one of the most active and engaged fan bases in the world and possesses a massive global footprint of more than 25 million subscribers to its YouTube network, and more than 3 million unique monthly visitors to RoosterTeeth.com and 1.8 million registered community members. Rooster Teeth is a subsidiary of Fullscreen, Inc., a global youth media company that develops online creators and produces multi-platform entertainment experiences.


About Rooster Teeth Productions, LLC
Rooster Teeth is a pioneering studio responsible for some of the biggest online series in history, such as the award-winning and longest-running web series, Red vs. Blue. They also produce the globally acclaimed animated series RWBY, the first western anime series to be distributed in Japan; the award-winning Rooster Teeth Podcast; and Immersion, a reality format that brings video game theory to the real world. Rooster Teeth has a massive global footprint of more than 25 million subscribers to its YouTube Network, 3 million unique monthly visitors to its RoosterTeeth.com hub and 1.8 million registered community members. The company was founded in 2003, and is now a subsidiary of Fullscreen, Inc., a global youth media company that develops online creators and produces multi-platform entertainment experiences. Discover more at RoosterTeeth.com.

About VIZ Media, LLC
Established in 1986, VIZ Media is the premier company in the field of publishing, animation distribution, and global entertainment licensing. Along with its popular digital magazine WEEKLY SHONEN JUMP and blockbuster properties like NARUTO, DRAGON BALL, SAILOR MOON, and POKÉMON, VIZ Media offers an extensive library of titles and original content in a wide variety of book and video formats, as well as through official licensed merchandise. Owned by three of Japan's largest publishing and entertainment companies, Shueisha Inc., Shogakukan Inc., and Shogakukan-Shueisha Productions, Co., Ltd., VIZ Media is dedicated to bringing the best titles for English-speaking audiences worldwide.