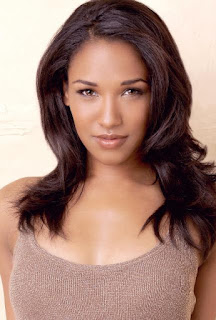 Candice Patton stars in The CW series The Flash, a spin-off of the popular "Arrow" on the same network. Her character, Iris West, is an investigative reporter at Picture News, and her long-time best friend is Barry Allen (a.k.a The Flash). Candice's father, police detective Joe West, works with Barry on the police force, and raised Candice and Barry after the death of Barry's mother and the incarceration of his father.

Candice was raised in Plano, Texas by her dad who is a retired FBI agent and mom who retired from a career in finance. She spent her free time in high school between playing volleyball, cheerleading, and theater. However, a knee injury forced her to change her focus and passion solely to acting and she has never looked back. After graduating from SMU, Candice moved to Los Angeles and again starred on The Young and the Restless.

One of the perks about working on such an iconic show like The Flash is earning cool points with her four year old nephew Sean, son of her big brother Nick, who is obsessed with all things superhero!

"Flash fans are going to flip," said Marc Nathan, promoter of the Baltimore Comic-Con. "Candice has become a core character on The Flash, helping the S.T.A.R. Labs 'team' with finding criminals and solving crimes. Her role as Barry's love interest has fluctuated so far, but those of us familiar with her character from comics have a pretty good idea of where that's headed! We're so excited Candice can join us this year, and we're excited to bring her for the fans."