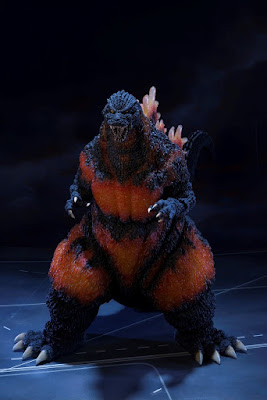 Anaheim, CA – Bluefin, the leading North American distributor of toys, collectibles, and hobby merchandise from Japan, Hong Kong and more, announces its participation at the 2016 G-FEST with something very special to be showcased at the largest event devoted to Godzilla and Japanese movie monster fandom.

New from Bandai, the Gigantic Series Godzilla 1995 is a massive rendition of the famous monster as he was depicted in the movie, Godzilla vs. Destroyah. Production is limited to only 500 units worldwide and the release is available exclusively from Bandiai’s official North American distributor, Bluefin. Standing nearly 2 feet tall, the Gigantic Series Godzilla 1995 will be displayed and also will be available for purchase at G-FEST.

G-FEST is the largest annual gathering of Godzilla and Japanese monster fans in the world. G-FEST XXIII and is being held this year from July 15th to July 17th, 2016 at the Crowne Plaza Chicago O’Hare in Rosemont, IL. More details on G-FEST are available at: http://www.g-fan.com.

The ultimate version of Godzilla from the movie, ‘Godzilla vs. Destroyah,’ where he burns up just before meltdown. Standing over 19 inches tall with a width of over 35 inches to the tip of his tail, this sizable rendering delivers some serious size to any Godzilla collection! Add him to your collection now before he melts away forever!

In addition to the Gigantic Series Godzilla 1995, Bluefin also will offer a variety of other monster-related products for purchase at G-FEST, including its popular line of poseable S.H. Monster Arts kaiju figures from Tamashii Nations.


About Bluefin
Based in Irvine, CA, Bluefin built its reputation as a leading distributor of Japanese toys, collectibles, novelty and hobby products. In recent years, Bluefin has grown to include a range of high quality collectible lines from the United States, Hong Kong, Taiwan and Singapore and established itself as the official North American consumer products and retail development partner for Studio Ghibli. Selling to thousands of specialty, chain and independent stores, Bluefin is an official North American distributor for Bandai Hobby, Kotobukiya and Capcom, is the sole provider of Bandai Tamashii Nations products, and is also the exclusive and official distributor for Hero Cross, Beast Kingdom, Mr. Hobby, SEN-TI-NEL and X-Plus. Bluefin also represents TruForce Collectibles products worldwide. Additional information is available at: www.bluefincorp.com.

Posted by Leroy Douresseaux at 10:16 AM