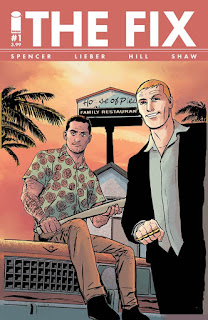 More re-printings of the bestselling series and more press releases about said re-printings... Didn't we warn you about this in the last one?

As many in the comics industry lament the slow news week and lack of major conventions, news items, and industry gossip during this month, Image Comics is pleased to alleviate this dry spell with an announcement of yet another bevy of re-printings for THE FIX by Nick Spencer and Steve Lieber. THE FIX #4 is slated for its second printing already and THE FIX #1 is going into its fifth printing in order to keep up with ever-increasing demand for the hot new series. Retailers reading this will immediately realize the potential for a little extra beer mon—er, customer base growth potential—and increase their orders.

As you know, dear reader, THE FIX is a story of the crooked cops, scheming mobsters, and corrupt politicians that run things—and the sex toy that can bring them all down. Corrupt politicians, anyone?

THE FIX #1, #2, #3, & #4 all remain available for purchase across all digital platforms, including the Image Comics website (imagecomics.com), the official Image Comics iOS app, Comixology’s website (comixology.com), iOS, Android, and Google Play. Instead of playing Pokémon GO all day it’s time to use your mobile for a little enrichment and read THE FIX. Unlike the rarest of Pikachu, you’ll be able to find this series no problem.

Posted by Leroy Douresseaux at 8:29 PM