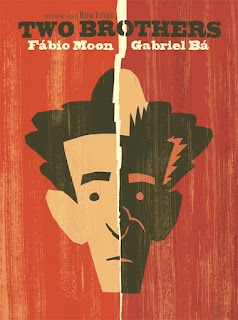 MILWAUKIE, OR — This past Friday, Fábio Moon and Gabriel Bá, the Eisner Award–winning and New York Times best-selling duo behind Neil Gaiman's How to Talk to Girls at Parties, received the Eisner Award for Best Adaptation from Another Medium for their critically acclaimed graphic novel Two Brothers.

Twin brothers Omar and Yaqub may share the same features, but they could not be more different from one another. After a brutally violent exchange between the young boys, Yaqub is sent from his home in Brazil to live with relatives in Lebanon, only to return five years later as a virtual stranger to the parents who bore him, his tensions with Omar unchanged. Family secrets engage the reader in this profoundly resonant story about identity, love, loss, deception, and the dissolution of blood ties.

The award for Best Coloring went to Jordie Bellaire, for The Autumnlands, Injection, Plutona, Pretty Deadly, The Surface, They’re Not Like Us, Zero (Image); The X-Files (IDW); The Massive (Dark Horse); and Magneto, Vision (Marvel).

The winner in the Best Digital/Webcomic category was Bandette, by Paul Tobin and Colleen Coover (Monkeybrain/comiXology, collected in print by Dark Horse). A costumed teen burglar by the nome d’arte of Bandette and her group of street urchins find equal fun both in skirting and aiding the law. This is the second Eisner for Bandette following a win in 2013.

Artists Colleen Coover (Bandette) and Joëlle Jones (Lady Killer, Brides of Helheim) were the women with the most nominations in a record-breaking year for female creators, with three each. Dark Horse’s Lady Killer, by Jamie S. Rich and Joëlle Jones, was nominated for Best New Series, and Jones was also nominated for Best Penciller/Inker and Best Cover Artist. The book also shared a coloring nod for Laura Allred.

Named for acclaimed comics creator Will Eisner, the awards are celebrating their twenty-eighth year of highlighting the best publications and creators in comics and graphic novels.

Congratulations to all winners and nominees.

"...come and see what flavor of genius the Brazilian-based brothers have crafted from the work of Milton Hatoum.” —COMICS BEAT