Image Comics Has a Second Printing on the "Horizon" 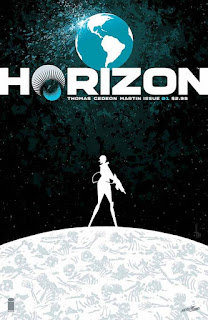 IMAGE/SKYBOUND PREDICTS BESTSELLER ON THE HORIZON

Image Comics/Skybound Entertainment is pleased to announce that the newest original series by Brandon Thomas (The Many Adventures of Miranda Mercury), Juan Gedeon (Ghost Racers), and Frank Martin (EAST OF WEST) launched to frenzied fan enthusiasm last week and is being fast-tracked to a second printing.

In HORIZON #1, Zhia Malen thought she’d fought her very last war, until she learned her planet was targeted for occupation… by a desperate world called Earth. The people of Earth will be told that her arrival on their planet means invasion; these are lies, this is retaliation.

ABOUT SKYBOUND
Founded in 2010, Skybound Entertainment is a multiplatform entertainment company specializing in television, comics, film, digital content, interactive, gaming, and merchandise. The company is led by The Walking Dead creator Robert Kirkman and his longtime producing and business partner David Alpert.