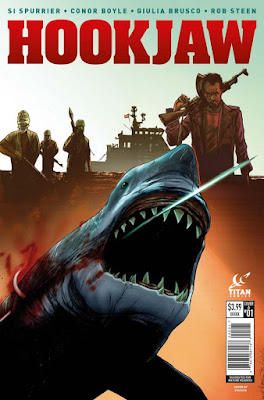 The mini-series is set to be an intense modern iteration of the titular ocean predator, which debuted in legendary British comic (and forerunner to 2000AD) Action #1. Initially inspired by the success of the film, Jaws, Hookjaw was one of many Action strips so violent it was banned from the shelves upon release!

“I've wanted to do a Hookjaw story as long as I've been making comics,” gushed A-list writer Si Spurrier. “Social, complex, intelligent and exceptionally good at what it does, today's Hookjaw arrives like a shadow amidst a catalogue of zoologists, soldiers, spies and Somali Pirates. Every person involved thinks they're the hero of the story. They're all wrong.”

As the series synopsis indicates, this creative team are pushing this new iteration into completely uncharted water.

Off the coast of Somalia, a rag-tag group of marine scientists are studying the Virgin Brides, a pack of female great white. What secrets are laying at the bottom of the Indian Ocean? And just how will they face up to the shadowy terror of the legendary great white – HOOKJAW?!

Hookjaw #1 will be on sale in comic stores and digital devices from December 2016 and is available to order from the October edition of PREVIEWS.