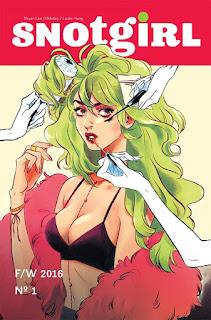 Image Comics is pleased to announce that the hot new series by New York Times bestselling Bryan Lee O’Malley (Scott Pilgrim) and Leslie Hung has been slated for a second printing immediately upon release in order to keep up with the overwhelming customer demand.

Who is Lottie Person? Is she a gorgeous, fun-loving social media star with a perfect life or a gross, allergy-ridden mess? Enter a world of snot, blood, and tears in SNOTGIRL.

Posted by Leroy Douresseaux at 10:02 AM