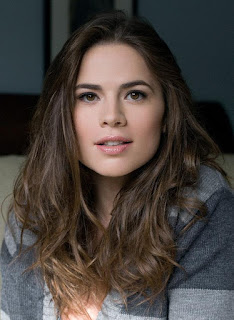 Hayley Atwell starred as Peggy Carter in Captain America: The First Avenger, acting as Steve Rogers' benefactor and potential love interest before his plunge into the ice. She reprised the role in Marvel's Agent Carter for two seasons. The show saw her star in the role of the feisty Agent Peggy Carter, the first series picking up a year after the events of Captain America: The First Avenger, and followed Peggy Carter's blossoming career as a secret agent. She also starred as Peggy in the Marvel One-Shot: Agent Carter (the predecessor to the series), in flashbacks in Captain America: The Winter Soldier, Marvel's Agents of S.H.I.E.L.D., Avengers: Age of Ultron, and Ant Man.

Atwell will be seen later this year leading a stellar cast in ABC's new drama series Conviction as a brilliant young attorney who happens to be the daughter of a former US President, blackmailed to head up LA's new Conviction Integrity Unit. Created by Liz Friedlander, the series will also feature Emily Kinney, Fode Bangoura and Merrin Dungey alongside Atwell as its star.

Hayley was most recently seen in the Kenneth Branagh-directed Cinderella, in which she starred alongside Richard Madden, Cate Blanchett, and Lily James. The film, which released in March 2015, was a live-action retelling of the classic fairy tale. She was seen as the lead female role in the John Ridley-directed Jimi Hendrix biopic Jimi: All Is By My Side, alongside Imogen Poots and Andre 3000.

Hayley's work in film is extensive. Hayley's Bess Foster was the object of Ralph Fiennes' Duke of Devonshire's affections in 2008's The Duchess. The same year, audiences saw Hayley in Brideshead Revisited alongside Emma Thompson, Matthew Goode, and Ben Whishaw. She also collaborated with Whishaw in Love/Hate, a short film which was awarded runner up in the 2009 Palm Springs International Festival of Short Films. Her other film credits include the noir thriller feature I, Anna, and Nick Love's film adaptation of the popular 70s TV series The Sweeney, in which Hayley played the female lead alongside Ray Winstone and Damian Lewis.

On television, Hayley won critical acclaim for her performance in the BBC's The Line of Beauty, an adaptation of Alan Hollinghurst's Booker Prize-winning novel. She appeared in the ITV remake of the 1960s cult classic The Prisoner,where she played Lucy alongside Ian McKellen and Ruth Wilson. Hayley received a Golden Globe nomination in the Best Performance by an Actress category for her outstanding performance in the Channel 4's Pillars of the Earth based on Ken Follett's novel. Her other television credits include Any Human Heart, Mansfield Park, Ruby in the Smoke, and Fear of Fanny, Restless, Play House presents: The Man, and Life of Crime.

Hayley is also well-known as an accomplished stage actress. In September 2011, Hayley completed a run of The Faith Machine at the Royal Court Theatre. For the National Theatre, she played in Major Barbara and in Man of Mode. Hayley's outstanding performance in the role of Catherine in A View from the Bridge earned her rave reviews and a nomination in the Best Supporting Actress category at the 2009 Olivier Awards. Hayley has most recently been seen starring in Alexi Kaye Campbell's Olivier Award-winning play The Pride.

"Fans will be knocking down our front doors now," said Marc Nathan, promoter of the Baltimore Comic-Con. "Everyone knows and loves Hayley. She is a huge star in our circles and out, she's a big part of the Marvel Cinematic Universe, and have you seen her lip-sync battles?? Step back!"

Posted by Leroy Douresseaux at 7:31 PM