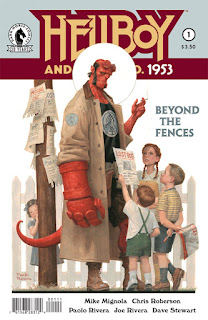 The Bureau for Paranormal Research and Defense (also known as the B.P.R.D. or BPRD) is an organization that appears in the world of Mike Mignola's Hellboy character.  The BPRD is located in Fairfield, Connecticut and investigates the occult, paranormal, and supernatural and is charged with protecting America and the world from any of that which is dangerous.

Hellboy and the B.P.R.D. is a series of miniseries that looks at the early years of Hellboy's association with the BPRD.  Hellboy and the B.P.R.D.: 1953 – Beyond the Fences chronicles Hellboy's second year with the organization.  This miniseries is written by Mike Mignola and Chris Roberson; drawn by Paolo Rivera (pencils) and Joe Rivera (inks); colored by Dave Stewart; and lettered by Clem Robins.

Hellboy and the B.P.R.D.: 1953 - Beyond the Fences #1 opens with Agent Susan Xiang having a session with Dr. N.K. Sandhu, psychiatric consultant to the BPRD.  The session is interrupted by Professor Trevor Bruttenholm, Director of the BPRD and Hellboy's surrogate father.  He is sending Hellboy, Xiang, and Agent Jacob Stegner to investigate the disappearance of several children in the suburban town of Rosemead, California.

The BPRD trio arrives to find the parents quite upset.  No one would expect children to disappear in such an idyllic small town as Rosemead.  After all, Rosemead is not one of those squalid urban slums into which Jim Crow and segregationist federal policy practically imprisoned African-Americans since early in the 20th century.  Now, that's where one would expect children to disappear, and no one would care, not even the mostly-white BPRD.  God knows that even the most imaginative fantasy writers cannot imagine a fucking fictional world where Black people were members of a paranormal organization.  Well, Asians were more acceptable than Negroes in the 1950s.

But I digress... Hellboy and his colleagues discover that there is much that is hidden about the disappearances.  This strange case may also be related to recent events that involve current members of the BPRD.

Hellboy and the B.P.R.D.: 1953 - Beyond the Fences #1 is, like most first issues these days, mostly introduction with a smattering of narrative that seems like filler material.  I think this comic book is also like most BPRD comics – when it's good, it's quite good, but when it's mediocre, oh, well.

This first issue of Beyond the Fences intrigues me, but the pace is too easy going.  Even the stuff that is supposed to be exciting, thrilling, and scary comes across as white bread.  This first issue is about as smooth as an episode of “Leave It to Beaver.”

Speaking of white bread and beaver, artist Paolo Rivera offers a beautiful painted cover for this first issue.  It is an un-ironic, Hellboy-themed homage to the paintings of Norman Rockwell, the revered 20th century painter who conjured up an idyllic Middle America better than even Walt Disney.  Rivera offers interior art that is pretty on the surface, but blasé as storytelling.  I have to believe that this is a graphical set-up for the scary shit-storm that is to come.  I have to believe...

I really think that this series has potential.  It is hard to believe that there can be mediocre Hellboy, other than that first Hellboy movie

Posted by Leroy Douresseaux at 6:31 AM