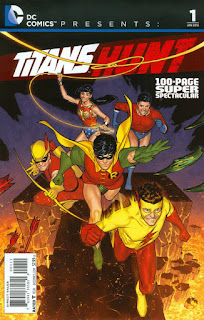 [This is a review was originally posted on Patreon.]

The Teen Titans are a DC Comics superhero team.  Also known at different times as the “New Teen Titans” or as the “Titans,” the team's members are teenage superheroes, some of them sidekicks of adult superheroes.  Also, a frequent theme of Teen Titans stories is of teenagers learning to take on adult roles and responsibilities.

The Teen Titans first appeared in The Brave and the Bold #54 (cover dated: July 1964) and featured the team of Robin/Dick Grayson (Batman's sidekick), Kid Flash/Wally West (Flash's sidekick), and Aqualad/Garth (Aquaman's sidekick).  The team made its first appearance under the name “Teen Titans” in The Brave and the Bold #60, which was also the issue in which a new character was added to the original trio, Wonder Girl/Donna Troy (the younger sister of Wonder Woman).  Speedy/Roy Harper (Green Arrow's sidekick) was initially a Teen Titans guest-star before becoming a team member.

This past fall (2015), DC Comics began publishing a miniseries entitled Titans Hunt, which dealt with the Teen Titans as they existed before the changes to the DC Universe wrought by the advent of The New 52.  In conjunction with Titans Hunt, DC published DC Comics Presents: Titans Hunt 100-Page Super Spectacular.  This stand-alone comic book reprints some of the original stories from the early comic book appearances of the Teen Titans.  The stories contained herein are reprinted from The Brave and the Bold #54 and #60 and Teen Titans #1 and #4

“The Thousand-and-One Dooms of Mr. Twister” is set in the idyllic small town of Hatton Corners.  Robin, Kid Flash, and Aqualad each receive letters from the Hatton Corners Teen Club.  The juvenile members of this club implore the teen superheroes to help them deal with their parents who just don't understand them.  However, both sides:  the adults and parents and teens and children have a bigger problem, the vengeful and villainous Mr. Twister, and he may be too powerful for a trio of teen superhero sidekicks to defeat.

“The Beast-God of Xochatan!” finds the Teen Titans:  Robin, Kid Flash, Aqualad, and Wonder Girl joining the Peace Corps.  Then, they are assigned to Xochatan, a South American locale where they must protect a dam-building project from a giant, rampaging stone conquistador.

In “The Secret Olympic Heroes,” the Teen Titans answer a call for help from Ted Bradley, an anxious father whose son, Davey Bradley, has vanished.  Davey is a gold medal hopeful in track and field at the Olympics in Tokyo.  Speedy joins the Teen Titans quartet in this story that pits the young heroes against Diablo, an “international organization dedicated to hate and distrust.”

Speedy returns to the Teen Titans in “Monster Bait!”  Robin tells his teammates that they have received a letter requesting help from 15-year-old Willie Gregson.  This brilliant young man has a summer job as a “guest student assistant” in the laboratory of “the great scientist,” Dr. Simon Finley.  The lab is located on a small island (apparently situated on a large body of water not too far from the Atlantic Ocean) where the Teen Titans find trouble as soon as they arrive.  That includes a shady fisherman, blackmail, and the “Lamprey Monster,” a giant serpent that spews fireballs from its mouth.

When I first saw DC Comics Presents: Titans Hunt 100-Page Super Spectacular on the shelf of my local comic book shop, I snatched it as if it were a winning lottery ticket.  I love DC Comics' Silver Age (as well as the Copper and Bronze Ages), especially comic books featuring Batman and Robin.  My love of Robin carried over to the Teen Titans, and I have long been fascinated with this team's first three decades of existence.  Early issues can be hard to find and/or expensive, and I prefer back issues over reprint and archival book collections.  DC Comics Presents: Titans Hunt 100-Page Super Spectacular is close enough to a regular comic book to please me, and boy, did it please me.

“The Thousand-and-One Dooms of Mr. Twister,” the first gathering of the heroes that would come to be known as the Teen Titans, is quaint.  It's adults vs. teens dispute is like a plot out of a family-friend teen movie from the 1950s and 60s.  It is set in a fictional world that resembles the idealized settings of classic television sitcoms like “The Andy Griffith Show,” “Father Knows Best,” and “Dennis the Menace.”  The story is silly and fanciful, more like a children's fantasy adventure than like a superhero story, but its conflicts and ideas are recognizable.

For me, the best thing about this story is the art by the great Bruno Premiani, one of my all-time favorite comic book artists.  Premiani's “clean line” style looks better during his run on Doom Patrol, but here, his composition and storytelling is quite imaginative in some spots.  I am also a fan of Nick Cardy, the late artist who had a long association with the Teen Titans, but his work here as lead artist on two stories only hints at what is to come from Cardy.

The last two stories in this collection deal with the relationships between fathers and sons, “The Secret Olympic Heroes” directly and “Monster Bait!” indirectly.  Bob Haney is not credited enough as one of the most imaginative comic book writers of all time.  In the Olympics story, he offers a substantive tale about an overbearing father who does not realize that he is chipping away at his son's confidence.  Both the father and the son's dialogue and emotions feel genuine.  In last story (“Monster Bait!”), Haney depicts Willie Gregson's expression of shock and horror at the threat made against his father (who does not appear in the story) in a way that rings with authenticity.