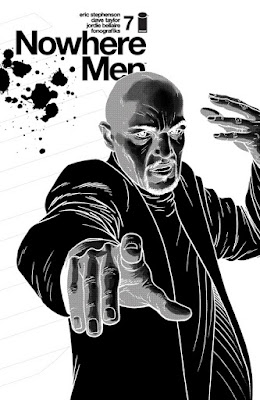 NOWHERE MEN FLIES OFF THE SHELVES

“I knew, going in, that this would be a unique working experience,” said Taylor. “But even my high hopes have been outdone. Working on Nowhere Men just keeps getting better and better! Hey, and where's all the hate mail??!!”

NOWHERE MEN #7 begins up where NOWHERE MEN, VOL. 1’s cliffhanger ending left off and opens with PLUTONA artist Emi Lenox’s rendering of a sequence plucked from the sketch diary of Emerson Strange’s daughter.

Multiversity Comics describes Lenox’s prologue “wonderful” and “delivered as a sort of online comic diary, she balances Stephenson’s story with some great images and excellent expressions.”

NOWHERE MEN #7, 2nd printing arrives in stores on Wednesday, February 3rd, 2016 and can be pre-ordered with Diamond Code DEC158647.

“A welcome return and feels as strong as the issues before it.” —All-Comic

“Stephenson hasn’t lost his touch either; he still retains the solid characterization that was with the characters before. Seeing these characters on the page again and their interactions reminded me of why I enjoyed the comic. The mix of science-fiction with corporate politics, celebrity status vs. regular people remains ever present and influential in Nowhere Men’s presentation. Those are many of the things that made Nowhere Men so intriguing to begin with so to see their return is welcomed. Really, it’s just great to have Nowhere Men back.” —Bounding into Comics

Posted by Leroy Douresseaux at 8:03 PM