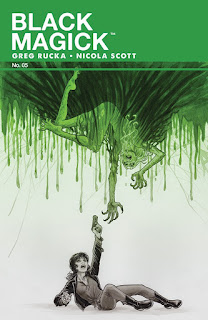 Previously in BLACK MAGICK, Detective Rowan Black found herself tangled up in a decidedly occult investigation—despite her efforts to keep her work and private lives separate—that quickly became quite personal.

In BLACK MAGICK #5, the first chapter comes to a conclusion, and it’s a trial by divination.

“This issue concludes the first half of the first ‘act’—and it upends the table,” said Rucka. “We start to see more of what not only what Rowan can do, but what Alex is capable of, as well; but more crucially, we get the first real reveal of what it is they’re up against. And it isn’t pretty. Literally and figuratively.”

“Rowan, Alex, pretty much everyone, has way more to fear than they thought,” said Scott. “Something's creeping through the cracks and the manipulation has just started.”

Posted by Leroy Douresseaux at 5:48 AM