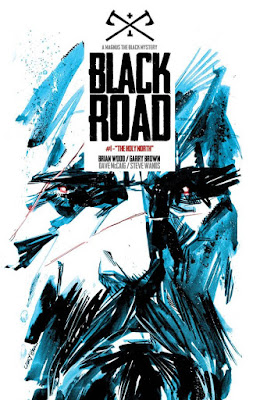 An all-new series from Brian Wood and Garry Brown

Bestselling writer Brian Wood (STARVE, Northlanders) and artists Gary Brown (The Massive, Catwoman) and Dave McCaig (Batman, American Vampire) team up for the all-new, ongoing Viking tale in BLACK ROAD, which was first announced during last year’s Image Expo and will be launching from Image Comics this April.

In BLACK ROAD #1, readers meet Magnus the Black—neither clean nor sober, neither Christian nor Pagan—but a man true to his word. When a ranking official under his care is brutally murdered, he’s prepared to hunt the killers to the frozen tip of Norway, religious war be damned.

“With Northlanders I went strictly historical,” said Wood. “But here we’re creating this almost heightened take on the Viking times, where Christian conversion was more like a military occupation, with churches dotting the landscape like green zones and there’s this highway of death heading forever northwards…. this is the Black Road. Anything, and everything, can happen on the cold road north.”

Wood first described Magnus The Black at Image Expo, calling him “a creaky fellow who suffers the boot of daily life but shows his steel where and when it counts.” But Wood later added onto the character’s description: “[He’s] a skeptic of the highest sort but operating with a very strong personal moral code. He’s suffered tremendously in his life, but keeps moving forward, keeps pushing on like an inexorable force of nature.”

“It's been a thrill to work on the book,” said Brown. “Drawing the environments and characters has been really rewarding. Plus working with Brian on a grim Viking book has been excellent. I'm excited for it to hit the stands.”