VIZ Media Goes "Behind the Scenes!!" 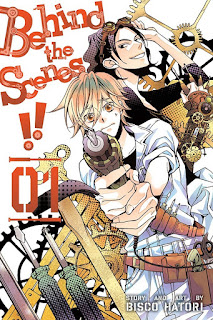 The new shojo series by the famed creator of OURAN HIGH SCHOOL HOST CLUB and MILLENNIUM SNOW will be published in print and digital editions under the Shojo Beat imprint. BEHIND THE SCENES!! is rated ‘T’ for Teens, and will carry a print MSRP of $9.99 U.S. / $12.99 CAN. The series also launches digitally on February 2nd via VIZManga.com and the VIZ Manga App, as well as from the Nook, Kobo, Kindle, iBooks, comiXology, and GooglePlay stores. Subsequent volumes of the continuing series will be published in English twice a year.

In BEHIND THE SCENES!!, Ranmaru Kurisu comes from a family of hardy, rough-and-tumble fisherfolk and he sticks out at home like a delicate, artistic sore thumb. It’s given him a raging inferiority complex and a permanently pessimistic outlook. Now that he’s in college, he’s hoping to find a sense of belonging. But after a whole life of being left out, does he even know how to fit in?!

As Volume 1 opens, it’s two months into Ranmaru’s college career, and if he’s learned one thing, it’s that he’s really uncomfortable around other people. But when he stumbles into a zombie mob attack, he’s totally forced out of his comfort zone! Of course it’s just a movie shoot, but when he wakes up from his ignoble faint, he’s been whisked away behind the scenes with the Art Squad! Could this group of weirdos be what Ranmaru’s been looking for all his life?!

“Creator Bisco Hatori continues to demonstrate her skill at capturing all of the complexities, cliques and daily dramas of student life in BEHIND THE SCENES!!,” says Pancha Diaz, Editor. “Ranmaru Kurisu has been a social misfit all of his life but he may have finally found a place to fit in after a chance encounter introduces him to a very unique, and slightly quirky, group of potential new friends.”

For additional information on BEHIND THE SCENES!! or other manga titles published by VIZ Media, please visit www.VIZ.com.

Posted by Leroy Douresseaux at 8:10 PM