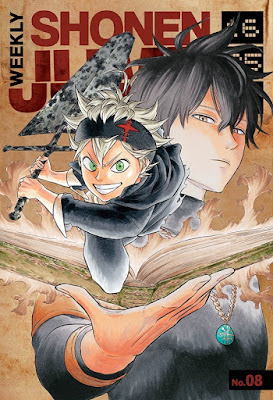 WEEKLY SHONEN JUMP is published digitally every week by VIZ Media and features the latest chapters of a wide variety of serialized fan favorite manga (graphic novel) titles presented in English and released on the same day as the magazine’s general print release in Japan.

For a limited time until January 31st, 2016, special 4 Year Anniversary promotional pricing will offer annual WEEKLY SHONEN JUMP memberships for only $19.99 (U.S. / CAN) through shonenjump.viz.com. In addition, fans that subscribe by February 8th will have the opportunity to win a variety of WEEKLY SHONEN JUMP premiums and collectibles including jackets, t-shirts, and more! More information on the sweepstakes is available here: http://bit.ly/1K1rqzx (*Note: this sweepstakes is available only to residents of the U.S. and Canada (excluding Quebec))

“WEEKLY SHONEN JUMP is essential reading for manga fans and we invite both new and current readers to take advantage of this special promotion. This is a great opportunity to dive into the latest chapters of some of the hottest series each week and receive a variety of other cool premiums throughout the year!” says Andy Nakatani, Editor in Chief of WEEKLY SHONEN JUMP.

Posted by Leroy Douresseaux at 5:32 PM