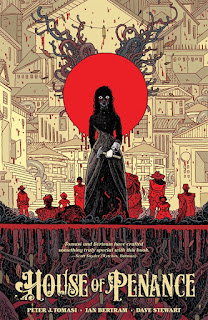 TOMASI & BERTRAM INVITE YOU TO THE "HOUSE OF PENANCE"

A story about guilt, ghosts, and guns

House of Penance is a horrific take on the true story of the Winchester haunted house and one woman’s mission to wash away the blood curse of the Winchester rifle that threatens to claim her own life and soul.

The Winchester house is famous for its original owner’s bizarre compulsion to incorporate in it a multitude of architectural curiosities. But as the bereaved Sarah Winchester’s workers toil on stairways to nothing and doors to nowhere, a mysterious stranger arrives . . . and he could make Sarah’s demons all too real.

"The journey that Sarah makes while building the house is intense and scary, and all the horrible things that put her there are going to be revealed during the course of the six issues along with the story of Peck, the gunfighter who goes looking for absolution under the strangest roof he could ever stumble upon," said Peter Tomasi in an exclusive interview with Entertainment Weekly.

In this House of Leaves meets Blood Meridian tale of how fortune brings misfortune, a grim and determined woman oversees the construction of a house twenty-four hours a day for twenty years with a simple motto: “keep busy building or get busy dying.”

“Tomasi and Bertram have crafted something truly special with this book.”—Scott Snyder (Wytches)

“House of Penance is hypnotic, disturbing and mysterious in all the right ways.”—Jeff Lemire (Descender)

“House of Penance by Tomasi and Bertram is a terrifying delight. It’s like eating the world’s most delicious peach and finding a live tarantula inside. One of the best new books I’ve read in years.”—Gail Simone (Leaving Megalopolis)

“Peter Tomasi and Ian Bertram make you want to sleep with the lights on after reading this tale of horror and dread that wraps you around the throat and doesn’t let go.”—Geoff Johns (Justice League)

“Tomasi and Bertram have built something compelling and unsettling in House of Penance—it’s a nasty piece of work that gets me excited.”—Brian Azzarello (100 Bullets)

About Ian Bertram
A graduate of the School of Visual Arts in New York, artist Ian Bertram was chosen as the Best New Talent of 2011 by Comicbookjesus.com, and selected to the Society of Illustrators 2012 Student Scholarship Competition. His work has appeared in the anthology magazine INK, the Detective Comics #27 anniversary special, and Batman Eternal from DC Comics. He has been a featured artist at the Greenpoint Gallery and the 30 Rooms art gathering. He lives and works in Brooklyn, New York.