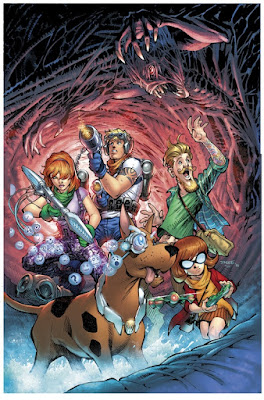 DC Entertainment to Publish Comics Based on Popular Hanna-Barbera Characters

BURBANK, Calif.--(BUSINESS WIRE)--Pajamas and a big bowl of sugary cereal is how many of us remember watching our favorite Saturday morning cartoons as kids. Beginning in May, DC Entertainment plans to give old fans and new the chance to relive (and extend) their childhoods with a new, modern lineup of comics based on some of Hanna-Barbera’s most popular cartoon characters, but reimagined in a fresh and contemporary fashion.

“With this initial lineup of titles and talent, we’re excited for fans to experience the reimagining of these Saturday morning classics with a more modern and contemporary look and feel.”

SCOOBY APOCALYPSE – Featuring character designs by veteran artist Jim Lee and an origin story by Jim Lee and Keith Giffen (JUSTICE LEAGUE 3001), artist Howard Porter (SUPERMAN) will provide his own unique take on Freddie, Velma, Daphne, Shaggy and Scooby-Doo. “Those meddling kids” and their Mystery Machine are at the center of a well-meaning experiment gone wrong and they’ll need to bring all of their mystery solving skills to bear (along with plenty of Scooby Snacks), to find a cure for a world full of mutated creatures infected by a nanite virus that enhances their fears, terrors and baser instincts. This time, the horrors are real in this apocalyptic near-future badland!

WACKY RACELAND – Take The Ant Hill Mob, Penelope Pitstop and Dick Dastardly, mix in a healthy dose of “Mad Max” and you get this dark and gritty take on Hanna-Barbera’s “Wacky Races,” courtesy of writer Ken Pontac (REBOOT, HAPPY TREE FRIENDS) and artist Leonardo Manco (HELLBLAZER), with vehicle designs by Mark Sexton (MAD MAX: FURY ROAD). A time of hope and innocence with Utopia at the finish line has given way to planetary Armageddon and a desert wasteland full of radioactive lakes, nanotech dust storms, and cannibalistic mutants. Against this backdrop, the Wacky Racers and their sentient vehicles continue their contest, but now the competition is for survival, and there can only be one winner when the checkered flag falls.

THE FLINTSTONES – Based on character designs by Amanda Conner (HARLEY QUINN, STARFIRE), writer Mark Russell (PREZ, GOD IS DISAPPOINTED IN YOU) provides his own unique perspective on everyone’s “modern stone age family.” Russell will use Bedrock’s most popular family to shine a light on humanity’s ancient customs and institutions in a funny origin story of human civilization. Fred is still the simple man, striving to be the king of his castle, Wilma is still the tolerant but not-indulging wife and Barney (with his wife Betty and infant son Bamm-Bamm) is still the original wingman, whose loyalty to Fred often outweighs his common sense.

“I can’t think of anyone that doesn’t look back at these characters with anything but fond memories,” said Dan DiDio, DC Entertainment Co-Publisher. “With this initial lineup of titles and talent, we’re excited for fans to experience the reimagining of these Saturday morning classics with a more modern and contemporary look and feel.”

For more information about Hanna-Barbera and DC Comics, visit the website at DCComics.com.


About DC Entertainment:
DC Entertainment, home to iconic brands DC Comics (Superman, Batman, Green Lantern, Wonder Woman, The Flash), Vertigo (Sandman, Fables) and MAD, is the creative division charged with strategically integrating its content across Warner Bros. Entertainment and Time Warner. DC Entertainment works in concert with many key Warner Bros. divisions to unleash its stories and characters across all media, including but not limited to film, television, consumer products, home entertainment and interactive games. Publishing thousands of comic books, graphic novels and magazines each year, DC Entertainment is one of the largest English-language publishers of comics in the world.


Posted by Leroy Douresseaux at 6:43 AM