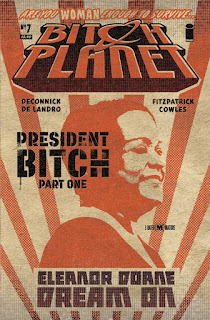 BITCH PLANET IS BACK WITH A NEW STORY ARC

Previously in BITCH PLANET, a new crop of non-compliants settled in for their stay on the Auxiliary Compliance Outpost. When a small group was offered a chance to earn their freedom, they took it, knowing the odds would be stacked against them at every turn.

In BITCH PLANET #7, PRESIDENT BITCH: PART 1 (OF 4), Operative Whitney has to answer for Meiko’s death and Kam gets a critical clue to the whereabouts of her sister.

"We’re back to the main narrative with this issue,” said DeConnick. “Meiko’s dad arrives on the outpost, we learn more about Josephson’s plan and Penny’s grief. Oh, and Kam gets a new cellmate. She’s a corker."

"There's a shower scene in this issue, and I only had to lay it out once,” said De Landro. “Enjoy, friends!"


Posted by Leroy Douresseaux at 10:04 AM