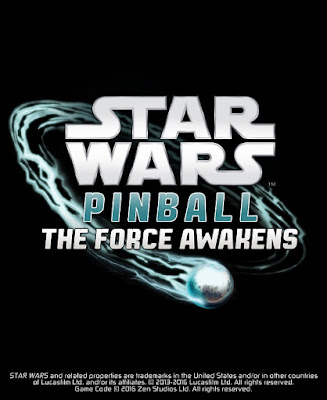 The Force™ will be With You in the Star Wars™ Pinball: The Force Awakens™ Pack

Experience the action and excitement of Star Warsᵀᴹ: The Force Awakensᵀᴹ in an out-of-this-world new digital Star Wars™ Pinball 2-Pack

San Francisco, CA – Zen Studios, creators of the hit Zen Pinball and Pinball FX2 digital pinball franchises, has announced its latest Star Wars™ Pinball tables from its ongoing partnership with Lucasfilm, Star Wars™ Pinball: The Force Awakens™ Pack, which combines two exciting new tables based on the blockbuster new film Star Warsᵀᴹ: The Force Awakensᵀᴹ. The Star Wars Pinball: The Force Awakens Pack will be available on Zen’s pinball platforms on console, PC and mobile the week of January 12, 2016. To celebrate this momentous occasion, Zen Studios has released a teaser trailer highlighting the brand new pack, which you can watch at the link below:

Star Wars Pinball: Might of the First Order puts players in command of the First Order, tasked with extending its power to many planets in the galaxy. Expand its rule beyond the outposts of civilization, and enforce its will in already controlled territories. Star Wars Pinball: Might of the First Order features an innovative two-level playfield where you must use the special ball-lock system on Kylo Ren's playfield to crush the Resistance, and control your own Star Destroyer with the help of a special magnetic upside-down ramp!

Both of the new Star Wars Pinball tables feature art, models, and sounds directly from the film.


About Zen Studios
Zen Studios is a world-renowned producer and publisher of interactive entertainment software for all leading digital game platforms, and is recognized as one of the top independent studios in the industry. The company is headquartered in Budapest, Hungary with offices in North America. Zen Studios has worked with some of the biggest brands in entertainment, including Telltale Games’ The Walking Dead, Capcom’s Street Fighter, PopCap Games’ Plants vs. Zombies, South Park, Marvel Entertainment, and LucasArts. Zen’s Pinball FX franchise on Xbox LIVE is one of the most popular titles on the platform, garnering numerous awards, and was named the bestselling game of 2011, while its tower defense title, Castlestorm, has released on a variety of platforms, including Xbox 360, PS3, Wii U, iOS, and Android to widespread commercial success and critical acclaim, including the Editor’s Choice distinction from Apple.

Posted by Leroy Douresseaux at 6:33 PM