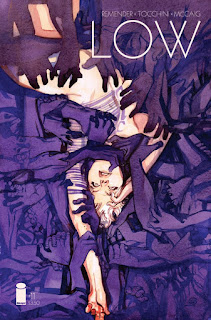 Previously in LOW, Stel Caine fought to raise herself from the depths of the sea to set foot on the surface of the Earth, battling all manner of enemies.

In LOW #11, Sisters Tajo and Della Caine return to their family home haunted by ghosts of their past. Do they seek blood or redemption?

“LOW 11 is the beginning of the third story arc and a very new direction for the series. Stel and her crew have made it to the surface and finally get to see what's up there. She's in a very different headspace now, with a new engine pushing her forward, but we've got some pretty devious plans on testing her. At the same time, her daughters Tajo and Della have reunited and are beginning a journey to find their mother. They're both in very different places mentally, and want different things from the reunion,” said Remender. “Greg, Dave McCaig, and Rus Wooton are producing the work of their careers; every page is doused in love. If you haven't been reading the book this is a good time to jump on as we set the stage for an entirely new adventure following the first humans to set foot on the surface of Earth in over 10,000 years.”

Posted by Leroy Douresseaux at 5:47 AM