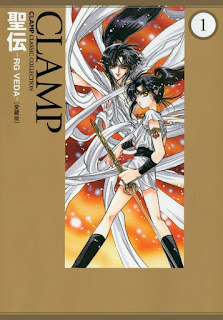 MILWAUKIE, OR—The breakout manga that put CLAMP on the map will be released by Dark Horse in summer 2016.

With over 600 pages, this is the first book in a three-volume omnibus edition that collects the entire RG Veda story with full-color pages, high-quality paper, and a larger print format.

RG Veda (pronounced “Rig Veda”) is based on a classic Indian saga. The lush, sprawling epic follows Yasha, once a mighty warrior king but now the lord of a slaughtered people he could not save. Yasha journeys the land as the companion and protector of the genderless Ashura, although he knows Ashura’s fate is interwoven with doom for many. Together they seek the other four of the “Six Stars,” whose prophesied gathering will at last defeat Taishakuten, the evil usurper of heaven’s throne. But all prophecies are open to interpretation . . .


About CLAMP
CLAMP takes its name from the farmer's term for a heap of potatoes, reflecting their origin as a self-publishing collective of fanzine artists. CLAMP went pro in 1989, and by 1993 there remained four core members: Nanase Ohkawa (main writer), Mokona (chief character designer), and Tsubaki Nekoi and Satsuki Igarashi (artists)--but like a band on different songs, the four often shift their roles depending upon the particular work. CLAMP's early shojo works such as Cardcaptor Sakura and Magic Knight Rayearth attracted the same audience as Sailor Moon, whereas 2001's hit Chobits confirmed their crossover success with male readers as well. More than a dozen of CLAMP's works have been adapted to anime, and collectively their manga have sold over 100 million copies worldwide. The authors live in Tokyo, Japan.

Posted by Leroy Douresseaux at 4:26 PM