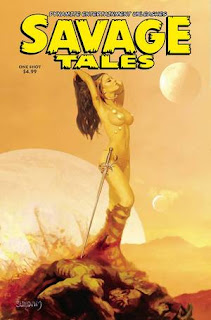 SAVAGE TALES: WINTER SPECIAL ONE-SHOT
DYNAMITE ENTERTAINMENT
STORY: Scott Bryan Wilson; David Avallone
ART: Max Fuchs; Eman Casallos; Mariano Benitez Chapo; Hamish Munro-Cook
COLORS: Gab Contreras; Adriano Augusto; Adrian Woolnough; Jorge Sutil
LETTERS: Taylor Esposito
COVER: Arthur Suydam
32pp, Color, $4.99 U.S. (December 2022)
Rated Teen+
Savage Tales is the title of an anthology comic book series that has been used by both Dynamite Entertainment and Marvel Comics (twice).  Dynamite recently brought its version back as a series of one-shot comic books.
Savage Tales Winter Special One-Shot contains four short comics stories.  There is a Draculina story, “Juicing with the Devil,” which is written by Scott Bryan Wilson; drawn by Max Fuchs; and colored by Gab Contreras.  Next up is a John Carter & Dejah Thoris story, “A Honeymoon on Mars,” which is written by David Avallone; drawn by Emas Casallos; and colored by Adriano Augusto.  Third is Vampirella story, “Crypt Junkies,” which is written by Wilson; drawn by Mariano Benitez Chapo; and colored by Adrian Woolnough.  Last is a Captain Gullivar Jones story, “His War Chapter II,” which is written by Avallone; drawn by Hamish Munro-Cook; and colored by Jorge Sutil.
All four stories are lettered by Taylor Esposito.  I am reviewing each story separately.
THE LOWDOWN:  Since July 2021, the marketing department at Dynamite Entertainment has been providing me with PDF review copies of some of their titles.  One of them is Savage Tales Winter Special One-Shot, which is the second time I have read a Dynamite Savage Tales comic book.
Draculina in “Juicing with the Devil” by Scott Bryan Wilson, Max Fuchs, and Gab Contreras:
Story:  A skinny young man is transformed from weakling to muscular strongman – by a demon.  The cost for this is that the transformed human must join his demon benefactor in a wrestling match against Draculina...
My thoughts:  This is a delightful story, very well drawn and colored.  The writer perfectly captures both the desperation and subsequent self-delusion of a guy who finally gets everything he thought he wanted and more.
John Carter & Dejah Thoris in “A Honeymoon on Mars,” by David Avallone, Emas Casallos, and Adriano Augusto:
Story:  An aerial outing sends John and Dejah on a rescue mission, but the result is the revelation of John Carter's savage past – one that is longer than he expected.
My thoughts:  This story is beautifully drawn by Emas Casallos and colored by Adriano Augusto in a way that remind me of stories from issues of old Heavy Metal and Epic Magazine.  Writer David Avallone deftly reconciles or perhaps, redeems John Carter of some of his past military affiliations, with emphasis on one in particular.
Vampirella in “Crypt Junkies” by Wilson, Mariano Benitez Chapo, and Adrian Woolnough:
Story:  Trash TV junkie, Vampirella, has a chance to appear on her favorite reality television series, “Crypt Junkies.”  The show basically breaks into sealed graves, tombs, crypts, etc. in order to “see the wonders inside.”  But maybe no one should be opening the "Grave of Omuo."
My thoughts:  This is another very well drawn story, and it really conveys the power and tragedy of writer Scott Bryan Wilson's clever tale.  I'd call “Crypt Junkies” one of the few original comic book stories that genuinely mixes the styles of Robert E. Howard and H.P. Lovecraft.
Captain Gullivar Jones in “His War Chapter II” by Avallone, Hamish Munro-Cook, and Jorge Sutil:
Story:  The story opens in France, September 1918.  The Earth man, Gullivar Jones, who once adventured on Mars, is now returned to Earth and trapped in the muck and mire of World War I.  He can wish himself away from this and return to Mars, but now, how is life on Mars?
My thoughts:  Gullivar Jones is the science fiction military man created by Edwin Lester Arnold.  Jones made one literary appearance in the 1905 novel, Lieut, Gullivar Jones: His Vacation.  Now, writer David Avallone is giving him new life in the medium of comics.  I think what Avallone is doing is creating a sequel to a character that was short-lived, or he is, at least, giving new life to an abandoned character.  In two chapters, he and Munro-Cook have breathed new life into Captain Gullivar Jones in a way that is true to old-timey science fiction and is also an intriguing reboot.  What makes me anticipate more of this is that the possibilities are endless … or at least Avallone and Munro-Cook think so.
Wow.  This issue is full of excellent stories, all well lettered by award-winning letterer, Taylor Esposito.  If I have to reluctantly pick a favorite comics story from Savage Tales Winter Special One-Shot, I will have to make a difficult choice.  I think I will go with “Crypt Junkies,” if only for the fact that it feels like it has potential to be a media franchise, but my eye is also on Gullivar Jones.
I READS YOU RECOMMENDS:  Fans of anthology comic books will want to read Savage Tales: Winter Special One-Shot.
A+
Reviewed by Leroy Douresseaux a.k.a. "I Reads You"
https://twitter.com/DynamiteComics
https://www.dynamite.com/htmlfiles/
https://www.facebook.com/DynamiteComics/
https://www.youtube.com/channel/UCNOH4PEsl8dyZ2Tj7XUlY7w
https://www.linkedin.com/company/dynamite-entertainment
The text is copyright © 2022 Leroy Douresseaux. All Rights Reserved. Contact this blog or site for reprint and syndication rights and fees.
-------------------------
Amazon wants me to inform you that the affiliate link below is a PAID AD, but I technically only get paid (eventually) if you click on the affiliate link below AND buy something(s).
Posted by Leroy Douresseaux at 4:33 AM