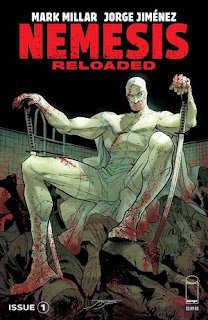 NEMESIS RELOADED #1 (OF 5)
IMAGE COMICS/Netflix
STORY: Mark Millar
ART: Jorge Jiménez
COLORS: Giovanna Niro
LETTERS: Clem Robins
EDITOR: Sarah Unwin
COVER: Jorge Jiménez with Giovanni Niro
VARIANT COVER ARTISTS: Steve McNiven with Giovanni Niro; Frank Quitely; Fiona Staples
28pp, Color, $3.99 U.S. (January 2023)
Rated M / Mature
Nemesis created by Mark Millar and Steve McNiven
Nemesis was a four-issue comic book miniseries from the team of writer Mark Millar and artist Steve McNiven.  It was published under Marvel Comics' “Icon” imprint in 2010-2011.  Millar and McNiven had previously produced two hugely popular Marvel event projects – the miniseries, Civil War, and the graphic novel, Wolverine: Old Man Logan.
Millar has decided to (softly) reboot Nemesis in a new five-issue miniseries entitled Nemesis: Reloaded.  It is written by Millar; drawn by Jorge Jiménez; colored by Giovanni Niro; and lettered by Clem Robins.
Nemesis Reloaded #1 opens in Fish Creek, Wisconsin.  Elderly couple, Margot and Jake, have discovered that their services have been … requested.
Who is Nemesis, and why does this eccentric billionaire who dresses up in a mask and cape want to terrorize people instead of helping them?  He has plans for Los Angeles, and by the time he is done, the city won't be the same.
THE LOWDOWN:  I have told this story before in reviews of a few other comic books.  When I first read Frank Miller's Batman: The Dark Knight Returns #1, I was left stunned for an hour or so …  Then, I read it again.  I thought about it the rest of the day and into the night until I fell asleep.  As soon as I woke up the next morning, I started reading it again.  I don't remember how many times I read it again while waiting for the second book in this legendary series to arrive.
When I read the original Nemesis #1 in 2010, I experienced a somewhat similar ecstasy, although I was much older then.  Still, I wanted to be Nemesis, causing chaos … and killing for a purpose and enjoying it.  Nemesis #1 remains one of the best first issues of a comic book that I have ever read.
I believe that Nemesis Reloaded #1 has surpassed Nemesis #1 in my countdown of magnificent first issues.  Reloaded even made me shit my pants – metaphorically speaking, of course.  It is the most evil comic book in the world because Mark Millar has made what should be repulsive so alluring.  I want to serve Nemesis, killing at his will.  Even Quentin Tarantino has never made murder and mayhem so sexy as Millar has done in Nemesis Reloaded, and murder and mayhem is a Tarantino specialty.
I have enjoyed quite a few comic books drawn by Jorge Jiménez, but none of them are like Nemesis Reloaded.  It is as if he has been freed of channeling childlike wonder so that he can draw the kind of comic books that made white people form decency committees in the 1950s.  It is as if Jiménez has rediscovered the vital essences of Klaus Janson's run on Daredevil, when Frank Miller was the designer and Janson drew and colored the book.
In fact, I would say that Millar and Jiménez have summoned peak Miller-Janson Daredevil (which would be Daredevil #181).  This time, Millar-Jiménez have made Bullseye the winner and the star of the remaining issues of their run.
Giovanni Niro colors Nemesis Reloaded … as if she lusted after the story, painting beautiful blue hues and maniacal red spurts all over the art.  Clem Robins letters this story as if he wants to commit murder, but has to settle for this vicarious experience.
If you say you want to read great comic books, but you won't read Nemesis Reloaded #1, dear readers, then, just stop lying to yourself.  You've lost that loving feeling that you once got from comic books, and it's gone...
I READS YOU RECOMMENDS:  Fans of Mark Millar comic books that make the reader come … back for more … will desire Nemesis Reloaded.
[This issue includes an introduction by Mark Millar.]
A+
Reviewed by Leroy Douresseaux a.k.a. "I Reads You"
https://www.mrmarkmillar.com/
https://twitter.com/ImageComics
https://twitter.com/mrmarkmillar
https://twitter.com/netflix
https://twitter.com/themagicorder
http://www.millarworld.tv/
www.imagecomics.com
The text is copyright © 2023 Leroy Douresseaux. All Rights Reserved. Contact this blog or site for reprint and syndication rights and fees.
--------------------------
Amazon wants me to inform you that the affiliate link below is a PAID AD, but I technically only get paid (eventually) if you click on the affiliate link below AND buy something(s).
Posted by Leroy Douresseaux at 2:57 PM