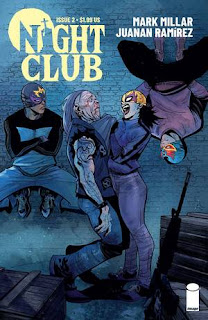 NIGHT CLUB #2 (OF 6)
IMAGE COMICS
STORY: Mark Millar
ART: Juanan Ramírez
COLORS: Fabiana Mascolo
LETTERS: Clem Robins
COVER: Juanan Ramírez with Fabiana Mascolo
EDITORIAL: Sarah Unwin
VARIANT COVER ARTIST: Juanan Ramírez
28pp, Color, $1.99 U.S. (January 2023)
Rated M / Mature
Night Club created by Mark Millar at Netflix
Night Club is a new six-issue miniseries written and created by Mark Millar and drawn by Juanan Ramírez.  An Image Comics publication and a Netflix production, Night Club focuses on a teen boy who is bitten by a vampire and decides to make the best of his new condition.  Colorist Fabiana Mascolo and letterer Clem Robins complete Night Club's creative team.
Night Club introduces 17-year-old Danny Garcia, who had ambitions to gain fame and fortune as a YouTube star with his friends, DJ Sam Huxley and Amy Chen.  Then, after a terrible accident, a vampire bites him, and his life goes awry.  Instead of living like a stereotypical vampire, Danny decides to live “la vida loca” of a superhero.
As Night Club #2 opens, Danny has just revealed to Sam and Amy that he is a vampire and a vampire who wants to be a superhero.  Plus, he wants them to be a part of his new life!  If they let Danny bite them, they can join him in the superhero team he is forming.  There are wrestling masks to buy and scores to settle, but do Danny and his new jack superheroes really understand what they are and what new limitations they have?
THE LOWDOWN:  Netflix/Millarworld sends me PDF review copies of the their comic books.  Thus, I was lucky enough to get a review copy of the first two issues of Night Club.
In Night Club, writer Mark Millar has created a modern and edgier teen superhero comic book in the spirit of the original Teen Titans of writer Bob Haney and artists Bruno Premiani and Nick Cardy.  Robin, Kid Flash, Aqualad, and then, Wonder Girl were always having such delightful adventures saving the day from bad guys and solving mysteries that involved unusual settings and strange people and beings.
In Night Club, the heroes are the strange and unusual beings, but they are still having fun.  And this fun is infections.  Millar has the uncanny touch of making me feel like I want to join Danny and friends.  Even if you are not inclined to be a vampire, dear readers, Millar makes you want to see his young character be bad – really bad – the kind of bad that is just so fun to watch.
Artist Juanan Ramírez continues to bring Millar's story to life in a graphical storytelling that has enough energy to light up a city.  Ramirez's art is both stylish and gritty and both explosive and smooth.  Fabiana Mascolo's colors make the story pop off the page.  It is as if the story is always throwing confetti in my face.  Even Clem Robins' lettering jumps like a musical score.
Night Club feels infectious and addictive, and the last page of each first two issues makes me jittery because I feel as if the publisher is cutting off the drug that causes my vampire superhero high.  I am recommending Night Club #2 as I did with the first issue.  Drink deeply of its fun.
I READS YOU RECOMMENDS:  Fans of Mark Millar and of vampire comic books will want to be bitten by Night Club.
A+
Reviewed by Leroy Douresseaux a.k.a. "I Reads You"
https://twitter.com/ImageComics
https://twitter.com/mrmarkmillar
https://twitter.com/netflix
https://www.mrmarkmillar.com/
http://www.millarworld.tv/
www.imagecomics.com
The text is copyright © 2023 Leroy Douresseaux. All Rights Reserved. Contact this blog or site for reprint and syndication rights and fees.
----------------------------
Amazon wants me to inform you that the affiliate link below is a PAID AD, but I technically only get paid (eventually) if you click on the affiliate link below AND buy something(s).
Posted by Leroy Douresseaux at 4:06 AM